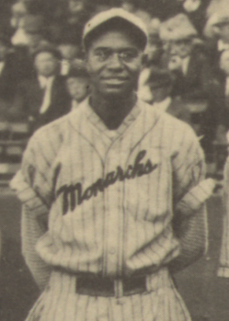 Duncan at the 1924 Negro World Series

Frank Duncan was considered one of the toughest defensive catchers in Negro League history, during a playing career that ran from 1920 through 1948, primarily with the Kansas City Monarchs. Only a fair hitter, he was nonetheless considered an invaluable part of the championship Monarchs teams. He played for eight pennant winners and managed two more, including a total of two world championships. As a catcher, he caught three no-hitters, in 1923, 1929, and 1936.

Duncan batted .267/~.358/.332 in 1924, helping the Monarchs claim the first of three consecutive Negro National League titles. He was batted only .139 (5 for 36) in the 1924 Colored World Series, won by the Monarchs in 10 games. Despite the low batting average, he enjoyed one of his most memorable moments as a player came in Game Eight when he singled the tying and winning runs home in a dramatic ninth-inning comeback victory by his team. The play was notable because veteran catcher Louis Santop dropped Duncan's foul pop-up one pitch before, and his key hit went through shortstop Biz Mackey's legs. Both Mackey and Santop were considered great defensive players, though Santop's best defensive days were behind him.

Duncan hit only .200 for Santa Clara in the winter of 1924. In 1925, the catcher slipped to .222 for the Monarchs. He went 3 for 21 in the playoffs and 4 for 21 in the 1925 Negro World Series. He again had a huge moment in the series, with a great tag on Otto Briggs at home in the 11th inning of game one. Duncan batted .247 in 1926. In June, he was in the middle of a fight when he collided with John Hines. During the melee, he was struck on the back of the head by the butt of a policeman's pistol. While Duncan was down, Jelly Gardner kicked him in the mouth with his spikes.

In the winter of 1926-1927, Duncan batted .276 and slugged .328 in the California Winter League. In 1927, the Kansas City native hit .395 while splitting time with T.J. Young. Had he qualified, he would have ranked 4th in the NNL in batting average. Duncan took part in a memorable tour of Japan by Negro League players that year; the blackball stars won 23 games, tied once and lost none. The fall trip included stops in Hawaii, China, Russia and the Philippines.

Duncan hit .370 in 1930, tying Jabbo Andrews for third in the NNL behind only Mule Suttles and Willie Wells. He was 5 for 13 with a triple for Cienfuegos in the 1930 CWL before the season was cut short. In the Campeonato Unico that replaced the CWL that year, he hit .276 with no extra-base hits in 29 AB for the Cienfuegos club.

Duncan was resurgent in 1938. He hit .247 for Kansas City and .378 for Chicago. His 4 triples led the Negro American League. In the 1938 East-West Game, he was 0 for 1 with a walk as the West's starting catcher and #7 hitter in a 5-4 win. He started a double play with a pick-off of Sammy T. Hughes during the game. Larry Brown took over behind the plate for Duncan.

In 1939, Duncan moved to the Palmer House Stars. They won the Illinois state semipro title.

Duncan played alongside his son, pitcher Frank Duncan III, in 1941, and they are thought to have been the first father-son battery in professional baseball history. Duncan went 0 for 4 against Bob Feller and Ken Heintzelman in exhibitions in 1941.

He became Kansas City's playing manager in 1942, directing them to a world title with a sweep of the 1942 Colored World Series.

Duncan was drafted into the US Army for World War II after the 1942 season. He became sergeant in the 371st Infantry Regiment of the 92nd Division. He showed off his precision by hitting 31 bull's eyes in 32 shots in rapid firing from 200 yards, a marksmanship record. He was honorably discharged early in 1943 and returned to manage the Monachs in 1943 before the season began.

At age 43 in 1944, he hit .144, and the Monarchs, decimated by the wartime manpower drain, suffered their first last-place finish in their history.

He was Jackie Robinson's first professional manager in 1945. He took Kansas City to the 1946 Negro World Series, which they lost in seven games to the Newark Eagles. He retired from managing after the 1947 season, turning over managerial responsibilities to Buck O'Neil.

He umpired in the NAL for awhile after that. He also ran a tavern in retirement.

Duncan was married in 1919 to noted blues singer Julia Lee. She frequently performed in all-white nightclubs in Kansas City, and Duncan had to sit with the orchestra, pretending to be a musician, in order to see her perform.