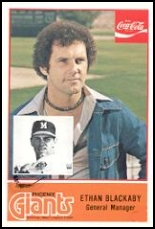 Outfielder Ethan Blackaby played a couple of seasons with the Milwaukee Braves. He was at the University of Illinois in 1960 at the same time as Ed Spiezio and Gary Kolb. Ethan showed an ability to hit for average and power in the minors and was up in the majors by 1962. His minor league career ran through 1969.

In 1962, it was tough to get playing time with the Braves, who had Hank Aaron, Gus Bell and Mack Jones playing the outfield. Outfield backups included Lee Maye, Lou Johnson, Tommie Aaron, Denis Menke (who played some outfield as well as infield) and Hawk Taylor (who played 11 years as a backup). In 1964, it was just as hard, as Rico Carty and Felipe Alou had been added to the mix. Gary Kolb, Ethan's college teammate, was also a backup outfielder, as was Len Gabrielson. After his playing days, he was the General Manager of the Phoenix Giants in the 1970s and early 1980s.