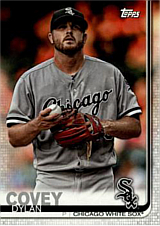 With a fastball clocked between 92 and 94 mph, pitcher Dylan Covey was the 14th player chosen in the 2010 amateur draft by the Milwaukee Brewers. After a physical with the team showed he had Type One diabetes, he did not come to terms and opted for college at the University of San Diego. He lost 40 pounds in his freshman year as he adjusted to his medical condition, but eventually got back into playing shape after learning to control the disease. The Oakland Athletics drafted Covey in the 4th round of the 2013 amateur draft, and he signed with a $370,000 bonus. He made his pro debut with the Vermont Lake Monsters on June 23rd, throwing two scoreless innings against the Lowell Spinners.

Covey spent four seasons in the A's organization he was selected by the Chicago White Sox in the 2016 Rule V Draft. He had gone 7-14, 5.46 between two Class A teams in 2014, then 8-9, 3.59 in a full season with the Stockton Ports of the California League in 2015. In 2016, he was limited to 6 starts with the Midland RockHounds of the AA Texas League, his season ending in May with a record of 2-1, 1.84. Given his lack of experience above Class A, he was considered a long shot to make the White Sox's roster in 2017, but the team, in full rebuilding mode, kept him around, betting that the potential he displayed as a top-ranked high schooler was still there despite the long and winding road since 2010. He made his debut on April 14th as the White Sox's starter against the Minnesota Twins and had a very good game, giving up only a run on 5 hits in 5 1/3 innings as the Sox won, 2-1. The game was also notable for featuring an outfield made up entirely of players named Garcia: Avisail in right, Leury in center, and Willy, also making his big league debut, in left.