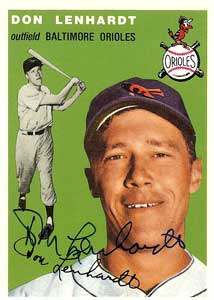 Don Lenhardt broke into the majors with a bang at age 27 with the sad-sack St. Louis Browns in 1950 when he hit 22 homers with 81 RBI with a nearly 40 percent OBP. It would prove to be his most productive major league season, although he was the Browns' leading hitter (.317) in the club's final year in 1953.

Lenhardt was born on October 4, 1922, in Alton, IL. He attended the University of Illinois at Urbana-Champaign in 1941 and Washington University in Saint Louis in St. Louis, MO in 1946. He was signed by the Browns as an amateur free agent in 1946, scouted by Lou Maguolo and Bill DeWitt. On June 4, 1951, he was traded by the Browns to the White Sox for Paul Lehner, Kermit Wahl and cash. On November 13th of that year, he was traded by the White Sox with Randy Gumpert to the Red Sox for Mel Hoderlein and Chuck Stobbs.

On May 3, 1952, the Red Sox beat the Browns, 5–2, in Fenway Park though odd occurrences interrupted the game. In the bottom of the 1st, two fraternity boys dressed in baseball uniforms ran onto the field and started throwing a rubber ball around. Two innings later a one-legged man on crutches jumped onto the field to talk to Browns shortstop Marty Marion and pitcher Earl Harrist. He then shook hands with Red Sox baserunner Lenhardt before being hurried off the field. On June 2nd, Lenhardt hit a 10th inning grand slam to help beat the White Sox 6-2. On June 3rd, he was traded by Boston with Walt Dropo, Fred Hatfield, Johnny Pesky, and Bill Wight to the Tigers for Dizzy Trout, George Kell, Johnny Lipon and Hoot Evers. On June 9th, he hit another grand slam, this time for the Tigers, versus his recent mates, the Red Sox, but Boston won the game, 9-8. On August 14th, he was traded by the Tigers with Dick Littlefield, Marlin Stuart and Vic Wertz back to the Browns for Jim Delsing, Ned Garver, Dave Madison, and Bud Black.

On May 21, 1953 at Fenway Park, BoSox catcher Del Wilber hit his third pinch homer of the year, a 14th-inning solo shot to beat reliever Don Larsen and the Browns, 3–2. In that game, Lenhardt took Hal Brown downtown with a center field shot just left of the flag pole and the last upright of the screen, one of the longest shots ever witnessed at the ancient ball yard. On May 12, 1954, he was purchased by the Red Sox from the Orioles, the Browns having moved to Baltimore, MD over the previous winter and changed their name as a result.

Nicknamed "Footsie" because of his narrow shoe size and difficulty finding shoes that fit, Lenhardt was a rangy power hitter whose slow drawl matched his running speed. He was dealt five times in five years, including the nine-player swap that sent George Kell to the Red Sox. A broken leg in 1954 ended his major league career. (BC)