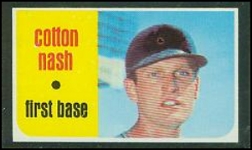 Cotton Nash was a better basketball player than baseball player, a distinction he shared with the likes of Dave DeBusschere, Danny Ainge, and several others. If he had to do it all over again, though, Nash says he would have stuck with baseball instead of trying to juggle the majors and the NBA. He set the career scoring record at the University of Kentucky in the 1960s.