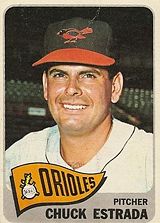 Pitcher Chuck Estrada excelled upon entering the majors with the Baltimore Orioles in 1960. He led the American League in wins with 18, made the All-Star team, and was named the AL's The Sporting News Pitcher of the Year Award winner. Estrada was in the O's rotation until 1962, mixing in plenty of strikeouts with wildness - he walked over 100 batters each of those three seasons. In 1962 he led the American League in losses, sporting a 9-17 record. A highlight came in that year as he hit his one career home run. It was on September 13th against the Washington Senators. The pitcher was Jack Jenkins. Estrada was hampered by elbow troubles throughout the remainder of his career, last seeing action in the majors with the New York Mets in 1967.

After his playing career ended, Estrada was a Texas Rangers coach in 1973 and a member of the San Diego Padres staff from 1978 to 1981. He was later a Cleveland Indians coach in 1983.

Estrada had a brief minor league managing career with the Visalia Mets in 1969, a team he was pitching coach and pitcher for that season. He was the second of three managers for a team that finished 80-60, placing second in the California League and losing in the league finals. He was also a minor league pitching coach for many years. He was a coach for the Charleston Charlies in 1982, Tacoma Tigers in 1985-1990, San Bernardino Spirit in 1993, and Central Valley Rockies in 1994.