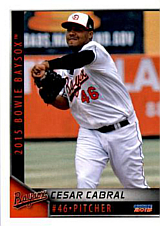 César was drafted by the Tampa Bay Rays in the 2010 Rule V Draft but returned to the Red Sox when he failed to make the Rays' out of spring training in 2011. He went 3-4, 2.95 in 36 games between Salem (11) and the Portland Sea Dogs (25) in 2011. All of his appearances were out of the bullpen and he recorded 9 saves while striking out 70 batters in 55 innings. He was then drafted by the Kansas City Royals in the 2011 Rule V Draft, then immediately sold to the New York Yankees. He did not appear on the field in 2012 after pitching well in spring training. He was diagnosed with a stress fracture in his elbow towards the end of spring, an injury that necessitated surgery and kept him out all season. He was back in 2013, starting the year with the Tampa Yankees of the Class A Florida State League. He did well, with a 2.57 ERA in 7 innings. His next two stops, in AA and AAA were less effective. He was 1-0, 5.49 in 15 games for the Trenton Thunder, and then 0-1, 7.20 in 10 games for the Scranton/Wilkes-Barre RailRiders, for a cumulative record of 1-1, 5.40. He did strikeout well over a batter per inning - 43 in 36 2/3 - which may explain why he received a call up to the Big Apple when rosters expanded.

In his major league debut for the Yankees on September 2, 2013, César pitched the 8th inning of a 9-1 win over the Chicago White Sox. He struck out the first batter he faced, Jordan Danks, then allowed a single to Josh Phegley before striking out Alejandro De Aza for the second out. After uncorking a wild pitch, he forced Gordon Beckham to line out to third baseman Mark Reynolds for the third out. He saw his longest big league stint that year, 8 games and 3 1/3 innings, with a 2.45 ERA. He made 6 more appearances over the next two years, with the Yankees (4) and Baltimore Orioles (2), for a combined 2 innings and 13.50 ERA. He last pitched with the York Revolution of the Atlantic League in 2019.

Cabral has a brother, a pitcher, who is also known as César, the only difference between the two being their different middle names - "Augusto" versus "Ariel" for his brother.