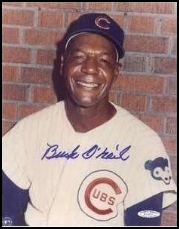 Buck O'Neil was a fixture in baseball circles from the 1930s until his death in 2006. He began his career in 1937 as a member of the Memphis Red Sox of the Negro American League. A first baseman, O'Neil hit .300/~.378/.402 in his career and was known primarily for his defense and contact hitting, lacking the power expected from the position. He became most famous as a storyteller and spokesman for the Negro Leagues, especially after his appearance on Baseball by Ken Burns. He was an effective advocate for the Negro Leagues, though some Negro League veterans felt he stole too much attention from other living players who also could publicize the game. As a charismatic spokesperson, he had few equals and in 2022 gained admittance to the [[[Hall of Fame]] through a vote of the Veterans Committee.

A brother, Warren O'Neil, also played professionally in some of the lesser Negro Leagues.

O'Neil worked in the celery fields of Florida as a youth and moved to Sarasota when he was 12. He was at Edward Waters College for six years as a baseball player. O'Neil began his professional career with minor teams, the Miami Giants, New York Tigers and the Shreveport Acme Giants. He made his first appearance with a top black team at age 25, going 1-for-8 in two games with the Memphis Red Sox in 1937. He then moved to the lesser Zulu Cannibal Giants to finish the year, making more money and getting more playing time.

The early years with KC[edit]

In 1938, he moved to the Kansas City Monarchs, where he spent the remainder of his career. Official stats compiled by SABR's Negro Leagues Committee show a BA/OBP/SLG .234/~.294/.298 with four doubles and 11 steals (second to Willard Brown's 16).

He hit .269/~.289/.352 in 1942. Despite fairly mediocre offensive stats, his defensive reputation (and the fact that Kansas City fans voted heavily), O'Neil was the leading vote-getter among position players for the East-West Game that year. He batted sixth in the first East-West Game of the year, going 0-for-4 with an error. In the second game that season, he hit seventh and went 0-for-4. He hit .353 in the Colored World Series that year and was 1-for-4 in an exhibition against Dizzy Dean, Johnny Grodzicki and Al Piechota. In '43 he hit .338/~.384/.426 and was 0-for-2 with an RBI and a sacrifice bunt for the West in the East-West Game. His season was cut short as he entered the military that year.

From 1943 to 1945, O'Neil served his country as a member of the US Navy, working in a construction battalion.

In 1945-46, O'Neil hit .216 in the Cuban Winter League. '46 marked a drastic improvement though. With Organized Ball and Mexican League having depleted some talent from the Negro Leagues, the 34-year-old O'Neil hit .350/~.388/.497 , winning the NAL batting championship. While never known as a power hitter, he did show some pop in the 1946 Colored World Series, hitting .333 with two home runs in the seven-game Series. O'Neil hit the second homer in a dramatic spot, the seventh inning of Game 7 to give Kansas City a 2-1 lead, though they lost the game 3-2 and the Series 4-3. He also hit .333 (six for 18) in an exhibition series against white major leaguers.

Statistics for his latter seasons are unreliable, due to the spotty coverage of the NAL after the Major Leagues had integrated. According to available statistics, he hit .253/~.340/.394 in 1950, while in 1951, he batted .328 and slugged .396. In 1953, his last known batting line was .476/~.476/.476 in 21 AB. Talent levels in the Negro Leagues had dropped precipitously within the decade of Jackie Robinson's signing as most of the best players headed to the majors, Mexico or the high minors. O'Neil retired as Monarchs manager following the 1955 season.

When Tom Baird retired as owner and sold the Kansas City Monarchs after the 1955 season, he granted O'Neil his unconditional release. O'Neil retired as a player, and was signed by the Chicago Cubs as a scout. He is correctly credited with having scouted Hall of Famer Lou Brock and having promoted the career of Elston Howard (who played for the Monarchs under O'Neil), and erroneously credited with signing Ernie Banks, who joined the Cubs three years before O'Neil was hired as a scout. He did sign Oscar Gamble for the Cubs however, after discovering him playing in a semi-pro game in Birmingham, AL.

In 1962, O'Neil was named as a coach for the Cubs, becoming the first black coach in the major leagues. He remained with the Cubs as a coach through the 1965 season. O'Neil was not allowed to coach on the baselines during games, and was not included in the rotation of Cubs' College of Coaches, denying him a chance to manage the club.

After 1988, O'Neil was a scout for the Kansas City Royals, in his adopted hometown. He was instrumental in the construction of the Negro Leagues Baseball Museum in Kansas City.

A long-time voice for the Negro Leagues on the Veterans Committee, O'Neil served as a committee member from 1981 to 2000. When the Hall allowed a single Negro Leaguer per year to be inducted 1995-2001, O'Neil's recommendations each year, aided by SABR's Negro League Committee, steered the Veterans Committee toward a single candidate each time, keeping the vote focused and assuring that seven players (Leon Day, Bill Foster, Willie Wells, Bullet Rogan, Smokey Joe Williams, Turkey Stearnes, and Hilton Smith) were inducted. O'Neil is cited as being heavily influential in the selection of Hilton Smith, who was his frequent roommate with the Monarchs.

O'Neil was thought by some sportswriters to be a favorite for election in the special Negro Leagues election held in February 2006, but he fell short of the needed votes in the secret ballot. There was considerable controversy following the announcement, much of it by Kansas City media and the Negro Leagues Museum. Much of the controversy has faded since O'Neil's death, although he continued to have strong advocates pushing for him. he finally gained election in 2022 through a vote of the "Early Baseball" era of the Veterans Comittee; he received 13 of 16 votes in recognition of his overall contribution to baseball and not just his playing record.

In 2017, it was announced that he would be honored through the refurbished Paseo YMCA in Kansas City. The building had been the site of the founding meeting of the Negro National League on February 13, 1920, but had since fallen into dereliction. The Negro Leagues Baseball Museum led the effort to have the historic building restored, and it was re-named the "Buck O'Neil Education and Research Center", its archives covering the entire history of the African-American community in Kansas City.

O'Neil was posthumously awarded the Presidential Medal of Freedom.