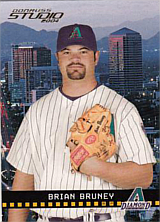 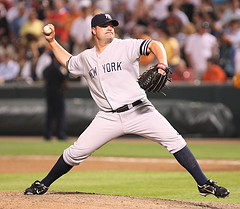 Bruney was selected by the Arizona Diamondbacks in the 12th round of the 2000 amateur draft. He was signed by scout Jason Goligoski and made his pro debut that summer with the AZL Diamondbacks, going 4-1 with a 6.48 ERA and 2 saves in 20 appearances. He began 2001 with the South Bend Silver Hawks and went 1-4 with a 4.13 ERA and 8 saves in 26 games before joining the Yakima Bears in July. With Yakima, he was 1-2 with a 5.14 ERA and 2 saves in 15 outings. Back with South Bend in 2002, he led the club with 10 saves and earned a promotion to the Double A El Paso Diablos in August. Between El Paso and the Triple A Tucson Sidewinders in 2003, he went 3-3 with a 2.70 ERA and 26 saves and was named the Diamondbacks Minor League Pitcher of the Year.

Bruney began 2004 with Tucson and was promoted to the majors in May. He debuted May 8th against the Philadelphia Phillies, throwing a scoreless inning of relief, and did not allow any runs in his first 6 outings, collecting 2 wins in the process. Overall, he was 2-0 with a 1.18 ERA and 5 saves in 31 games for the Sidewinders and 3-4 with a 4.31 ERA in 30 appearances for the Diamondbacks despite missing nearly a month with an elbow injury. He spent most of 2005 Diamondbacks in the majors with Arizona and was the team's closer from May through July, amassing 12 saves during the year.

After struggling with Tucson to begin the 2006 campaign, Bruney was released by Arizona and signed with the New York Yankees. Following stints with the GCL Yankees and Columbus Clippers, he joined the Yankees bullpen in August and went 1-1 with an 0.87 ERA in 19 games. That fall, he got his first taste of postseason ball, making 3 appearances against the Detroit Tigers in the ALDS. He spent the majority of 2007 on the Yankees roster and went 3-2 with a 4.68 ERA in 58 games. Despite missing more than two months of the 2008 season with a foot injury, he went 3-0 with a save and a 1.83 ERA in 32 outings. He also made the only start of his big league career on April 9th, throwing 2 scoreless innings against the Kansas City Royals. The next summer, he went 5-0 with 14 holds and a 3.92 ERA in 44 games despite missing a portion of the season with an elbow injury. He made one appearance in that fall's World Series, giving up two earned runs over a third of an inning in Game 1.

Following the 2009 campaign, Bruney was traded to the Washington Nationals. He struggled in 2010, going 1-2 with a 7.64 ERA in 19 games before being released in late May. He was signed by the Milwaukee Brewers and made two appearances for the Nashville Sounds but was let go less than a month later. He caught on with the New York Mets and was 0-1 with a 4.50 ERA in 8 outings for the Buffalo Bisons before his season was ended by a shoulder injury. He became a free agent and was signed by the Chicago White Sox. He started 2011 with the Charlotte Knights, for whom he was 1-0 with a 1.31 ERA and 7 saves, when he was recalled by the Sox in late May. Through his first 18 appearances in the Chicago bullpen, he posted a 1-0 record with a 2.30 ERA, but everything fell apart from that point on. He was given his release on August 15th, when his ERA had ballooned to 6.86 in 23 games. He signed a new minor league deal with the Pale Hose in 2012, making a final scoreless big league appearance on June 24, 2012.

As a child, Bruney was an extra in the 1990 Arnold Schwarzenegger action comedy Kindergarten Cop.