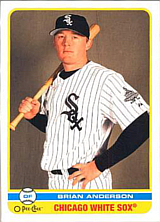 Brian Anderson played five seasons in the majors as an outfielder, then finished his career as a minor league pitcher.

He was selected by the Chicago White Sox in the first round of the 2003 amateur draft, after his junior year at the University of Arizona. He was a second-team All-American outfielder according to Baseball America. The right-hander's .366 batting average and .668 slugging percentage earned him a spot on the Pac-10 All-Conference team. Anderson pitched 10 games for the University of Arizona in 2002, and later saw a few mound appearances in the minor leagues. He recorded plenty of strikeouts, but surrendered a number of hits.

In August 2005, Brian was called up to Chicago to replace the injured Scott Podsednik. He hit two home runs in 36 at bats, but his batting average fell to .176. The White Sox won the 2005 World Series, and Anderson, though not included on the postseason roster, could be seen celebrating alongside Aaron Rowand after Podsednik's winning home run in the second game of the series. The White Sox shipped Rowand, the starting center fielder, to the Philadelphia Phillies after the 2005 season; the move opened a starting spot for Anderson. The former first round pick started very slowly in 2006, hitting under .200 in the months of April, May, and June. He hit a more respectable .257 in the second half after White Sox hitting coach Greg Walker identified flaws in his swing to raise his season average to .225. He hit 8 home runs and drove home 33 runners in 365 at bats.

Anderson began the 2007 season as a backup to Darin Erstad, getting only 17 at-bats before being sent down to Charlotte. The White Sox suffered numerous injuries, but Anderson was never recalled, sparking rumors that the center fielder fell out of favor with the organization. He hit .255 in 200 at bats with Charlotte. A strong performance in spring training the following year impressed White Sox manager Ozzie Guillen, and Anderson returned to the majors in 2008 as a backup outfielder, being used primarily as a defensive replacement. Anderson was traded in mid-season 2009 to the Boston Red Sox. He hit well in limited play, posting a line of .294/.381/.647 in 17 at-bats.

He was in spring training in 2010 with the Kansas City Royals, but although he hit well, he could not break into the starting lineup as an outfielder. He dropped a bombshell by saying he would try to convert to pitching, given his inability to earn a regular spot as a hitter. He split 2010 between the AZL Royals (0 R in 5 innings), Burlington Bees (3 R in 5 1/3 innings) and Omaha Storm Chasers (2 R in 7 innings) for a 2.08 ERA his first year as a hurler. In 2011, he was 1-0 with 2 runs in 7 2/3 innings for the Trenton Thunder and in 2012, he was 0-1 with one run in six innings for the Somerset Patriots. He only pitched 27 games as a pro, but had a 1.74 ERA and 35 K to 6 BB in 31 innings. In 2015, he began a comeback attempt when the White Sox signed him to a minor league contract. He decided to return to the outfield, hopeful that the experience over the years would help him handle things better than in his first go-round. On April 2nd, he was released.