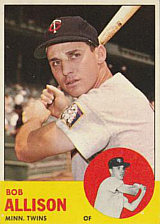 "Anyone can be as successful at baseball if he follows in the path of Bob Allison. All you have to do is be 6'4", strong as a weightlifter, handsome as a shirt model, have the personality of an honor graduate from Dale Carnegie, and, alas, work your head off." - Leonard Schecter, Sport magazine, September 1964

Along with teammate Harmon Killebrew, slugging outfielder Bob Allison was one of the biggest stars on the Washington Senators/Minnesota Twins in the 1960s. Allison hit 29 or more homers in five different seasons. Though he struck out a lot like many sluggers, he received more than his share of walks. Despite a mediocre career .255 batting average, his career on-base percentage was higher than average, nearly 36 percent.

After attending the University of Kansas, where he also played football, Allison was signed by the Senators. He reached the majors in September 1958 and was a starter on Opening Day 1959. In his first full season in the majors, he was an All-Star, hit 30 homers, led the American League with 9 triples, and won the AL Rookie of the Year Award. Over the next five years, he hit more than 25 home runs four times but was overshadowed by Killebrew, who led the league several times during that span.

Allison had many long ball heroics with the Twins. On July 18, 1962, against Cleveland, he and Killebrew became the first teammates ever to hit grand slams in the same inning. Against the Indians the following May 17th, he hit 3 homers in a game. On May 2, 1964, Tony Oliva, Allison, Jimmie Hall, and Killebrew hit four consecutive home runs off the Kansas City A's.

After his baseball days, Allison worked for the Coca-Cola company. In his later years, he suffered from ataxia, a neurological disorder, and died in 1995 at the age of 61.