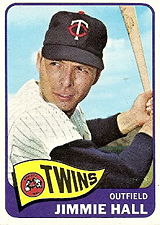 Jimmie Hall hit 121 home runs in an eight-year major league career. In 1963 he finished third in the Rookie of the Year Award voting.

Jimmie was signed by the Washington Senators in 1956 and played in the minors from 1956 to 1962, never hitting more than 17 homers in a season. In 1956 he started out with a .385 average and .686 slugging percentage with the Superior Senators of the Class D Nebraska State League. However, in subsequent years, Hall tended to have a low average, and that might have kept him from moving to the majors more quickly; he also played several positions in the minors.

He made his major league debut as a regular in 1963, appearing in 156 games and hitting 33 home runs with the Minnesota Twins. He played 93 games in center field, 89 in left field and 15 in right field. The other two outfielders were Harmon Killebrew (45 homers) and Bob Allison (35 homers) as the team led the American League in home runs. Hall's 136 Adjusted OPS+ was the seventh-best in the league. It was quite an accomplishment for Hall to become a regular in the Twins' outfield that year since back-ups on the team included the young Tony Oliva and the veterans Wally Post, Vic Wertz and Jim Lemon. Hall was a year older than Oliva and two years younger than Killebrew.

In 1964 Jimmie's home run total slipped a bit but his batting average rose, and he made the All-Star team. He played exclusively center field that season. He was also an All-Star in 1965, when his .285 batting average was eighth best in the league and his 25 doubles were also eighth best. He added 14 stolen bases, good for 10th best in the league. The Twins reached the World Series that year, but Hall appeared in only 2 of the 7 games, going 1 for 7 with a walk and 5 strikeouts. Allison, Oliva and Joe Nossek, who'd been to bat only 170 times with a .218 average during the season, received the bulk of the playing time in the outfield. Hall was disadvantaged as a lefty hitter because two of the Los Angeles Dodgers' starting pitchers in the series - Sandy Koufax and Claude Osteen - were lefthanders.

Starting in 1966, Hall's batting averages dropped notably, but a lot of that was due to the second dead-ball era when averages around the league dropped substantially. However, even with that, he wasn't dominating to the extent he had been earlier in the decade, especially since his power disappeared. He was traded to the California Angels for the 1967 season. After five years in the majors, he averaged nearly 23 home runs per year, but would be strictly a back-up after that. His last major league year was 1970, which he split between the Chicago Cubs and Atlanta Braves; he played briefly in 1971 at Hawaii.

Jimmie Hall broke the American League rookie record for the most home runs (previously held by Ted Williams) when he hit 33 in 1963. He was beaned in 1964 and was never quite the same. He was not good against lefties, and explained that in the rural area where he grew up he rarely saw any lefties. As of 2008, he still lived in the Mount Holly, NC area where he was born.