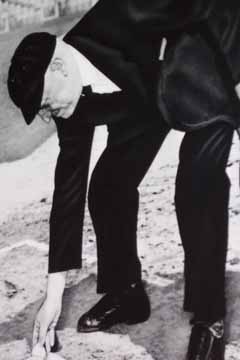 Bill Grieve was an umpire 22 years (1934-1955), four in the minors (1934-1937) and 18 in the American League (1938-1955). He was born on April 25, 1900 in Yonkers, NY. Never attending High School or College, he went to work at the Smith Carpet factory right after grammar school. He then worked at the sugar house, and later became assistant director of the Yonkers Recreation Department. He married Irene Corke on December 5, 1917 with whom he had sons William, Jr. and Donald. Billy then went into the armed forces during World War I. He came home a Sergeant. (OB)

Once home from the War, Grieve began his umpiring career at Glen Park (now War Memorial Field) in 1922. He also played basketball for four different teams, and coached the Cook Post American Legion Baseball team to the 1926 Junior World Championship. After his first game as an umpire, he knew that being an umpire was what he was meant to do. He signed as an umpire with the Eastern League in 1934 and began his umpiring career at age 33.

In his first week of American League umpiring, he ejected Oral Hildebrand and Ben Chapman in separate incidents. He made the controversial call that gave the Boston Red Sox a victory over and the lead in, the League’s 1949 pennant race with the New York Yankees. He umped his final MLB game on September 25, 1955 at age 55. He umpired in 2,784 games, not including 17 World Series games (1941, 1948 and 1953) and two All-Star Games (1941 and 1949).

Few major league baseball umpires rose so rapidly in esteem from players, managers and fans. From the sandlots of Yonkers to the Major Leagues to three World Series, Grieve called a lot of men out, and just as many safe. He incurred the wrath of baseball greats like Casey Stengel, Ralph Houk, Yogi Berra, Joe Lapchick of basketball fame and Cliff Mapes: He enjoyed their friendship and admiration as well.

His fair yet hard-nosed style earned him the respect of all. Many a great player argued with some of his calls: Billy Grieve never second-guessed his calls, he knew in his heart he made the right calls. This skill, character and integrity gave him the coveted opportunity to umpire in the World Series.

Grieve was known for two things among American League players: his many little fears and phobias, and for showing favoritism to the New York Yankees. Although the latter charge was without merit, some players called him the Number One Yankee Fan. (RTM)

Grieve, considered the “grand old man of baseball in Yonkers and Westchester”, was recognized for his umpiring excellence and fairness by players, team owners and most importantly by the fans. A true Yonkers sportsman, he came full circle as a member of the Yonkers Sports Hall of Fame, in front of the sandlot which gave him his start.

He had black, greying hair and blue eyes, his ancestry was Scotch-Irish and his principal hobbies were bowling & movies. A lifelong resident of Yonkers, he died at age 79 in Yonkers from cancer on August 15, 1979. Grieve was survived by his wife Irene, and two sons, William Jr. and Donald.

"The control pitchers are the best. The wild men are usually behind the hitter and they scream for all the close ones because they need them so badly. Bobby Feller was a bad man for umpires. He had such a good curve, thrown with almost as much speed as his fastball, that he kept us on our toes every minute."

Grieve often talked about the lonely lives of MLB umpires, who are barred from staying at the same hotels as players or traveling from city to city with teams. "But we umpires are not as bad as we are painted out to be. We're nowhere near as bad as Joe McCarthy New York Yankees manager would have you believe in the story he tells. According to Joe, he had a dream that he had gone to heaven. Up there behind the Pearly Gates he saw the greatest baseball players of all time and just couldn't resist the temptation to form a team. Then the problem arose of arranging a schedule for his invincible array. Joe was trying to puzzle that out when the phone rang. It was the devil. 'I've got a team which can beat yours,' Satan told him. 'Impossible,' said Joe. 'I've got all the great players who ever lived. How could you expect to beat me?' Thereupon the Devil replied: 'You may have all the ballplayers, but I have all the umpires.'"