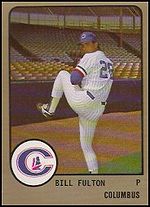 Pitcher Bill Fulton was drafted by the New York Yankees in the secondary phase of the 1983 amateur draft. Fulton saw action in the big leagues for a total of 3 games in 1987 with the Yankees. His first outing was memorable; on September 12th he gave up back-to-back-to-back home runs to the Toronto Blue Jays' Ernie Whitt, Jesse Barfield and Kelly Gruber.

"Everybody always dreams of having a great debut. I figured I'd make this a funny one and get it out of my system." - Bill Fulton on giving up back-to-back-to-back home runs in his big league debut.