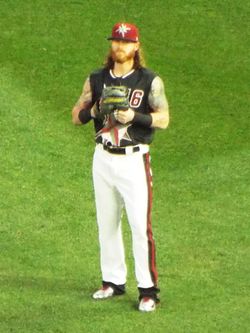 The brother of big leaguer Mat Gamel, outfielder Ben Gamel made his major league debut in 2016.

Gamel made his major league debut with the Yankees in May of 2016, but played only 6 games for them, going 1 for 8. He had a great season with the Scranton/Wilkes-Barre RailRiders, however, being named Player of the Year in the International League by hitting .308 in 116 games, with 80 runs, 6 homers and 51 RBIs. The RailRiders went on to win the Triple-A Baseball National Championship, but by that time, he had been traded to the Seattle Mariners on August 31st, in return for two minor leaguers. The M's gave him a good look in September, as he played 27 games, hitting .200 with 1 homer and 5 RBIs.

He started the 2017 season back in AAA with the Tacoma Rainiers of the Pacific Coast League, where he hit .300 in 19 games. He was called up to Seattle on April 26th, and was a starter the rest of the way, first in right field, and then in left field beginning in mid-June. He played 134 games and hit .275 with 27 doubles, 11 homers, 68 runs and 59 RBIs. These were decent numbers, but his OPS+ was just 98, the result of drawing just 36 walks while striking out 122 times. Still, it was a promising rookie season, and he was expected to be a starter in 2018, until he strained his right oblique muscle in the first week of March in spring training. He was expected to be out four to six weeks, forcing him to miss the start of the season. He was the third outfielder counted on for opening day to go down, after Mitch Haniger and Guillermo Heredia, which prompted the M's to negotiate with 44-year-old veteran Ichiro Suzuki to make a comeback with the team with which he remained most associated. He played his first game on April 18th, but also missed the first half of August with another injury, limiting to 101 games. When he was able to take the field, he hit .272, but with just 1 homer and 19 RBIs. The Mariners were disappointed with his level of production and after the season, on December 21st, trade him to the Milwaukee Brewers along with minor league pitcher Noah Zavolas in return for OF Domingo Santana. While the Mariners had made a number of trades characteristic of a fire sale that off-season, that one was a more typical baseball trade, as they took the opportunity to acquire another outfielder of roughly the same age, but who had demonstrated more power and durability than Gamel, while being presently blocked in Milwaukee because of the presence of three star outfielders.