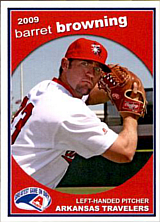 Barret Browning reached the major leagues with the St. Louis Cardinals in 2012.

The St. Louis Cardinals picked Browning in the AAA phase of the 2011 Rule 5 Draft in the offseason and he made his debut with the team on June 30th, after starting the season for the Memphis Redbirds, for whom he went 2-3, 1.89 with a .192 opponent average in 30 games. He and Maikel Cleto were called up to replace struggling Sam Freeman and Eduardo Sánchez. In his MLB debut, he entered in the 6th with a 6-2 deficit against the Pirates. He went 1-2-3, getting Jeff Karstens, Alex Presley and José Tábata. In the 7th, he again had a perfect inning, facing Andrew McCutchen, Casey McGehee and Neil Walker. He left for pinch-hitter Matt Carpenter in the bottom of the 7th. He made 22 appearances at the big league level, to the tune of a 5.12 ERA and a 7/11 BB/K ratio in 19 1/3 innings. He was designated for assignment in January 2013 and finished his career in organized baseball with 13 appearances with the Memphis Redbirds.