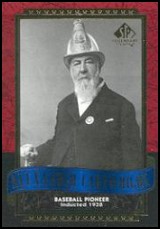 Alexander Cartwright is considered by some to be the true father of the sport of baseball, although his story may be as much of a myth as that of Abner Doubleday inventing the game in the pastoral setting of Cooperstown, NY. According to The Baseball Book, "Cartwright, a surveyor, laid out the field with the bases 90 feet apart and drew up rules (including three strikes and three outs) for the first game played between organized teams, in Hoboken, New Jersey, in 1846." While it played its games in Hoboken, the team that Cartwright organized in 1845 took the Knickerbocker Base Ball Club of New York name. [1]

Cartwright worked in New York City, but he and his friends played ball in Hoboken because that's where there were open spaces at the time. Even there, though, civilization was encroaching, with a glue factory being built on one side of their field and a couple of roads also infringing on their space. Part of Cartwright's alleged genius was to design a diamond and have the batters face out toward an outfield. That way, the glue factory and the road wouldn't be a major problem and the other road was in the far outfield, which was also not a problem.

Cartwright was also insistent that his set of rules be the only rules by which his team would play. [2] His rule-set was popular, but of course other people came up with other approaches. One in particular, the Boston rules (also called the "Massachusetts game"), were an alternative that still existed when Ty Cobb was a youth, because he remembered that people would sometimes play by those rules.

Cartwright moved to Honolulu, HI in 1849, first moving west to take advantage of the California Gold Rush, and taught the game to locals there (while also serving as the Honolulu fire chief). Many years later, Babe Ruth visited Hawaii and honored Cartwright's memory. Cartwright's involvement with baseball represented only a small portion of a busy life as an adventurer, business man and family man. For his part, he counted his role as Hawaii's first fire chief as his proudest accomplishment.

For many decades, Doubleday was honored as the father of baseball, due to the desire of Al Spalding to have a Civil War hero as the inventor of the game. An elderly engineer who had been with Doubleday many decades earlier testified in the early 20th century to the Mills Commission that Doubleday had invented the game, but it seems clear at this point that the man simply got his dates badly mixed up. However, the evidence behind Cartwright being more than one member of a group of New Yorkers who only refined and popularized a pre-existing game is just as flimsy, based on notes by one sportswriter, Thomas Rankin, who wrote about it many decades after the fact and then embellished the story a number of times. The myth of his having single-handedly invented baseball was picked up by a number of writers however, and gained momentum in the first decades of the 20th century.

Cartwright's grandson, Bruce Cartwright, launched a campaign in 1938 to have his grandfather's contributions to the beginnings of the game recognized and sent evidence of his role to the newly-formed Hall of Fame. This led to Cartwright being elected to the Baseball Hall of Fame on September 13, 1938 by the Centennial Commission as one of the pioneers in the game. August 26, 1939 was declared Alexander Cartwright Day throughout Major League Baseball, to coincide with the centennial anniversary of the game. Hawaiian-themed celebrations were put on in all ballparks and at the Hall of Fame in Cooperstown, NY. The main focus of events was Ebbets Field, in Brooklyn, NY, where Hawaii official William McGonagle made a speech about Cartwright's accomplishments between the two games of a doubleheader and read a message from the territory's Governor, while leis and pineapple juice were offered to players from both teams. This date made history for other reasons as well, as the first game of the doubleheader, Cincinnati's 5-2 win over Brooklyn, was the first MLB game to ever be shown on television, courtesy of NBC's experimental station W2XBS.

There is a myth in circulation on the internet that Congress formally recognized Cartwright as the inventor of baseball on May 3, 1953. However, research by legal archivist Adam Berenbak proved that this never happened, and that they myth took hold in the early 1990s for reasons unknown.

There has been other revisionism about Cartwright's role, led by historian John Thorn, as it is clear that some form of baseball was played before the Knickerbocker Rules were put in place, and that many of the innovations credited to Cartwright have other sources. Just as the Doubleday legend was built on very flimsy evidence, a counter Cartwright legend also exists that has just as little basis in substantiated facts. Still, he remains a key figure in the early development of baseball.