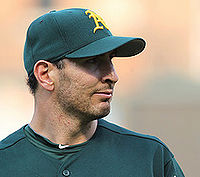 Adam Rosales was drafted by the Cincinnati Reds in the 12th round of the 2005 amateur draft. He was signed by scout Rick Sellers and made his pro debut that summer.

Playing for the Oakland Athletics on May 8, 2013, Rosales had a home run taken away from him in unusual circumstances. He hit an apparent long ball off Chris Perez in the 9th inning of a game against the Cleveland Indians that would have tied the score at 4-4. However, the umpires, led by crew chief Angel Hernandez, ruled a double, even after a video review, when evidence seemed to suggest otherwise. Manager Bob Melvin argued long and hard that the ball had in fact left the field, and was ejected for his trouble, while Rosales was left stranded on second base as the game ended, 4-3, in Cleveland's favor. What made the call highly unusual was that the following day, Major League Baseball Vice-President Joe Torre was forced to admit that the umpiring crew had made a mistake and that the hit should have been ruled a home run. However, he added that while umpires strove to achieve perfection, errors were part of the game and that the call would be allowed to stand.

Rosales was part of a strange back-and-forth carousel between the Athletics and Texas Rangers later in the 2013 season. On July 31st, the A's designated him for assignment when they acquired IF Alberto Callaspo at the trading deadline; the Rangers claimed him off waivers on August 2nd, but when they tried to demote him to the minor leagues on the 5th, Oakland claimed him right back. That second stay in the Bay Area was short-lived, as he was again designated for assignment on August 10th, and claimed for a second time by Texas two days later. What made the series of moves even more odd was that the two teams were battling neck-and-neck for first place in the AL West when all this was going on.