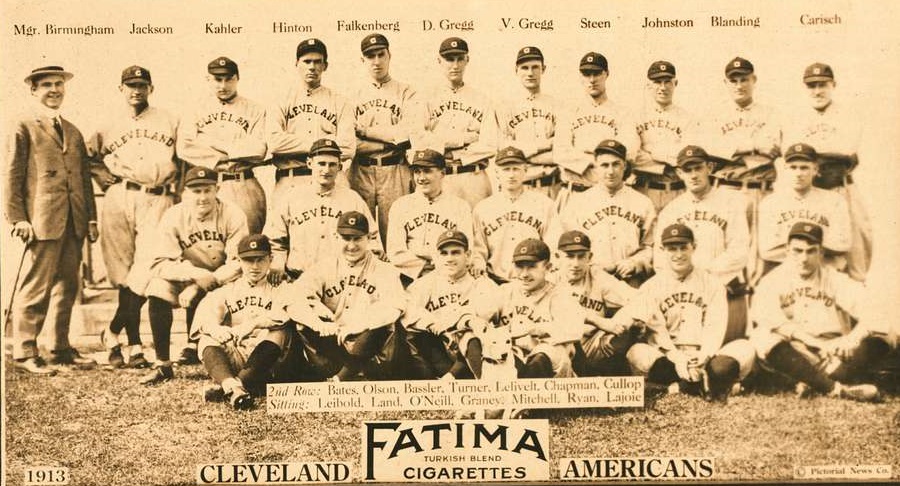 Heading into the season, the 1913 Cleveland Naps had finished in the second division three of the previous four years and were not considered serious contenders for the pennant. However, they confounded the experts by getting off to a hot start, including winning 13 of 14 games starting on May 21st. But their main contenders, the Philadelphia Athletics were even better in the first three months, and on July 3rd, the Naps were 9 1/2 games back in spite of a 44-29 record. They finished the season also 9 1/2 games back of the A's, but in third place as the Washington Senators managed to move past them during the second half. Still, it was a successful season.

One of the keys to Cleveland's good start was P Cy Falkenberg, who was back from spending the previous season with the Toledo Mud Hens. There, he had developed a new pitch similar to the emery ball that had helped Russ Ford take the American League by storm, and he started off 10-0, 1.44 before falling down to earth and finishing at 23-10, 2.22. Other key pitchers were Vean Gregg (20-13, 2.24) and Willie Mitchell (14-8, 1.91). However, their best player was clearly OF Shoeless Joe Jackson, who was still hitting .440 on June 6th and finished at .373 with 39 doubles, 17 triples and 109 runs. He led the AL in hits (197), doubles and slugging percentage (.551). He was a bit of a one-man show, as his 71 RBIs - not a particularly high figure, even for the Deadball Era, led the team, with OF Jack Graney and 38-year-old 2B Nap Lajoie (the team's namesake, even if he was no-longer player-manager) tied for second with 68.