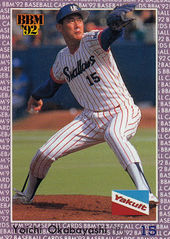 Yoichi Okabayashi was a pitcher in Nippon Pro Baseball for a decade, making three All-Star teams. He was probably the most successful 20th Century baseball player born in Paraguay.

Okabayashi's parents were both Japanese living in Paraguay. He returned to Japan in 8th grade, having played some baseball in Paraguay and continuing in Japan. He was 28-18 with a 1.85 ERA in college and was named the Tokyo Metropolitan University League MVP once. The Yakult Swallows picked him in the first round of the 1990 draft. As a rookie in 1991, he went 12-6 with 12 saves, a 3.97 ERA and only 19 walks in 106 2/3 IP. He was among the Central League leaders in games pitched (45, 7th), wins (tied for 7th with Kazuhisa Kawaguchi and Shinji Imanaka) and saves (4th).

In 1992, he went 15-10 with a 2.97 ERA and made the CL All-Star team. He finished among the league leaders in almost every category: ERA (8th, between Toshiro Yufune and Kazutomo Miyamoto), wins (2nd, 2 behind Masaki Saito), complete games (12, tied for second with Hiromi Makihara and Saito, one behind Koji Nakada), shutouts (3, tied for 3rd with Koji Noda and Masumi Kuwata), losses (tied for 8th), innings (197, tied for 6th with Shinji Sasaoka), hits (190, 5th, between Makihara and Sasaoka), homers (20, 4th, between Makihara and Tatsuo Komatsu), runs (70, tied for 9th with Komatsu) and earned runs (65, tied for 8th with Masahiro Yamamoto). He excelled in the 1992 Japan Series, going 1-2 but with a 1.50 ERA and 22 K to 3 BB in 30 IP; he worked almost half of Yakult's 67 innings in the Series. He went 12 innings to beat the Seibu Lions in Game 1, then allowed only a Koji Akiyama homer in game 4 but lost 1-0 as Tomio Watanabe, Yoshitaka Katori (who went to the same high school) and Tetsuya Shiozaki combined on a whitewash. In game 7, he again went the distance, only to lose a 2-1 duel to Takehiro Ishii. In the 10th, Akiyama hit a sacrifice fly to score Hatsuhiko Tsuji with the decisive run. Okabayashi easily outperformed rotation mates Kazuhisa Ishii, Daisuke Araki and Hikaru Takano. He even went 2 for 7 at the plate for a better average than all the Yakult starting position players except Tetsuya Iida; part-time second baseman Johnny Paredes was also higher, as was a backup outfielder. Joe Stanka had been the last hurler to throw three complete games in a Japan Series, back in 1964, while no one had pitched as many innings in a Series since Tadashi Sugiura in 1959. He got the Fighting Spirit Award as the MVP of the losing side in a Japan Series.

He later was a minor league pitching coach for Yakult from 2001 to 2004 then became a scout for them.