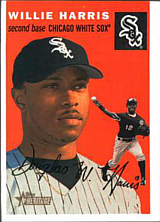 Willie Harris, who scored the winning run for the Chicago White Sox in Game 4 of the 2005 World Series, is from the same hometown as Hall of Famer Jackie Robinson. He went 6 for 6 with 2 triples and 6 RBI on July 21, 2007, becoming the second player in Atlanta Braves history with a 6-hit game, 37 years after Felix Millan did it.

In 2016, Harris was appointed hitting coach of the Great Falls Voyagers, a White Sox affiliate in the Pioneer League. He became a manager with the Winston-Salem Dash in 2017 and moved up to the Double A Eastern League in 2018, managing the Richmond Flying Squirrels. In 2021, he was named third base coach of the Chicago Cubs.

He is a nephew of Ernest Riles.