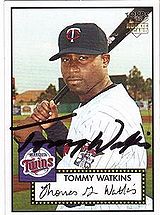 Tommy Watkins became a minor league coach and manager after his retirement as a player, staying in the Minnesota Twins organization. In 2019, he was promoted to his first major league coaching job, as first base coach under new manager Rocco Baldelli.