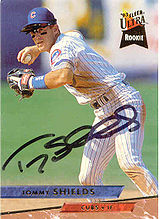 Infielder Tommy Shields played college ball at the University of Notre Dame and graduated with a degree in economics. He later earned a master's degree in sports management from the University of Massachusetts. The Pittsburgh Pirates drafted him for a second time in the 15th round of the 1986 amateur draft and he played in their minor league system from 1986-1990. Shields was traded to the Baltimore Orioles in the spring of 1991 and he made his major league debut with the Orioles a year later. He spent 1993-1994 playing in the Chicago Cubs organization and opened the 1993 season with the Cubs.

Shields' career path was shaped to a considerable degree by his desire to spend time with his wife and children. It also reflects his attitude towards a baseball career. After his second year of managing, he told a reporter that "'Anybody who thinks they know where they're going in baseball is a wizard ... I don't even know if I want to manage in the big leagues. Maybe, I want to be a general manager. I just worry about taking it one year at a time. You really do, but you try not to tell your wife that."