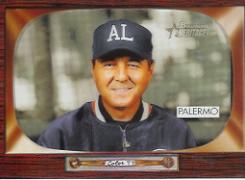 Steve Palermo began umpiring in minors in the New York-Penn League in 1972. He then moved to the Eastern League in 1973-1974 and the American Association in 1975-1976. He also worked in the Puerto Rican League and Dominican Winter League.

Palermo moved up to the American League full time in 1977 after working a few games in 1976. He was the home plate umpire for Dave Righetti's no-hitter in 1983. He worked the 1983 World Series and 1986 All-Star Game. On July 7, 1991, Palermo ran out of a restaurant to help two women who were being mugged. He was shot and was paralyzed, unable to walk for several years. He threw out the first ball of the 1991 World Series. In 1994, he was hired as Special Assistant to the Chairman of the Major League Executive Council. In 2000, Palermo became Supervisor of Umpires for Major League Baseball following the merger of the two leagues' umpiring staffs. He helped write the first major leagues' umpire manual.

In 2005, he served as honorary commissioner at The White House Tee Ball initiative for children with physical disabilities.