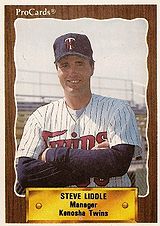 Catcher Steve Liddle was signed as a non-drafted free agent by the California Angels in 1981. He was traded to the Minnesota Twins in March 1987 for Stan Holmes. Liddle played through 1988.

After his playing days ended, Liddle was a minor league coach and manager in the Twins organization. In 1995-1996, he was the hitting coach for the Salt Lake Buzz. In 1999-2001, Liddle was the Twins minor league field coordinator. From 2002 to 2012 he was the Twins bench coach under Ron Gardenhire. When Gardenhire was hired as the manager of the Detroit Tigers in 2018, he appointed Liddle as his bench coach once again. He left after the 2019 season.