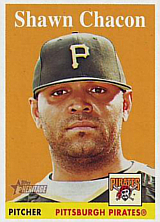 Shawn Chacon pitched 8 major league seasons. He was adopted as a 4-year-old after his mother placed him in a foster home. His nickname is Shack.

Chacon was 10-0 with 2 saves and a 1.51 ERA as a senior and led his team to a Colorado state title. He only allowed 14 earned runs all season. He had a scholarship offer to Arizona State University, but the Colorado Rockies took him in the third round of the 1996 amateur draft and he signed with them.

Chacon had a fine minor league debut, going 1-2 with a 1.60 ERA for the AZL Rockies; in 56 1/3 innings, he allowed 46 hits and 15 walks while striking out 64. He only gave up one home run. Chacon led the AZL in ERA. Baseball America rated him the #3 prospect in the AZL, behind teammates Jake Westbrook and John Nicholson and well ahead of Ramon Ortiz (#10) and Brad Penny (not in the top 10). Promoted to the Portland Rockies, he was 0-2 with a 6.86 ERA late in the year. He was ranked the 7th overall Rockies prospect, between Westbrook and Doug Million.

Chacon was moved to the closer's role in 2004 and was 1-9 with a 7.11 ERA, 35 saves and 9 blown saves (tying for the NL lead). He had a 1.94 WHIP. He was the third major leaguer to record 30 saves in the year in which he made his first MLB relief appearance; Billy Koch and Kazuhiro Sasaki had done so previously. Chacon was 1-7 with a 4.09 ERA back as a starter for the Rockies in 2005 before being dealt to the New York Yankees for Eduardo Sierra and Ramon Ramirez. He went 7-3 with a 2.85 ERA for the Yankees, snapping the 2-20 skid he had been on since the 2003 All-Star break. He also made the lone postseason appearance of his career that year with a start in the Division Series against the Los Angeles Angels of Anaheim.

The veteran right-hander was 5-3 with a 7.00 ERA for the Yankees in 2006 and was traded to the Pittsburgh Pirates for Craig Wilson. He had a 2-3, 5.48 record for the Pirates. Chacon battled with Tony Armas Jr. for the 5th spot in the Pirates rotation in spring training in 2007, creating the odd spectacle of the two highest-paid pitchers on the club fighting for a minor spot. Chacon lost out and spent most of the year in relief, going 5-4 with a save and a 3.94 ERA in 64 appearances and re-establishing himself once again.

Chacon moved to the Houston Astros as a free agent for 2008. He had a 4.14 ERA after 9 starts - and no decisions despite not getting yanked early much (54 1/3 IP). He thus set a MLB record for the most starts to open a season without getting a decision. Chacon was credited with a win in his 10th start, and had lost his last start of 2007; so he just missed the record of ten straight no-decisions at any time, set by Dick Stigman and tied by two others. He was pulled from the starting rotation in late June, with his record standing at 2-3, 5.04 in 15 starts. Chacon was suspended indefinitely on June 25th after grabbing general manager Ed Wade by the neck and throwing him to the ground. He was waived the next day and never pitched in the majors again.