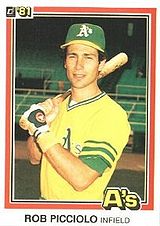 Known for his solid defense, shortstop Rob Picciolo played nine seasons in the major leagues, primarily with the Oakland Athletics. Following his playing days, he remained in baseball, most notably as a longtime big league coach.

A Southern California native, Picciolo was drafted three times before being selected by the A's in January 1975. He spent that summer with the Birmingham A's and the following season with the Tucson Toros. He reached the majors in 1977 as Oakland's Opening Day shortstop, and he hit .200 in 148 games in his rookie campaign. Over the next four years, he saw regular playing time with the Athletics. He saw the only postseason action of his career in 1981, going 1-for-3 in the ALDS against the Kansas City Royals and 1-for-5 in the ALCS against the New York Yankees.

Early in the 1982 season, Picciolo was dealt to the Milwaukee Brewers for Mike Warren and Johnny Evans. He had the mixed blessing of being Robin Yount's backup for a year and a half with the team. Although he played sparingly, he did have the opportunity to go the World Series in 1982. He moved on to the California Angels in 1984 and ended his playing career back with the A's in 1985.

Following his playing days, Picciolo managed the Spokane Indians in 1986 and 1987, winning the Northwest League crown in the latter year. After a stint as a roving instructor in the San Diego Padres organization, he was a major league coach for the Padres from 1990 to 2005. He spent the next five years as a roving instructor in the Los Angeles Angels minor league system. In 2011, he was named the Angels bench coach, a role he held through the end of the 2013 season.