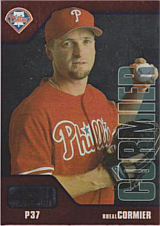 Rhéal Cormier, a left-handed pitcher who spent most of his career as a LOOGY, was born April 23, 1967 in Moncton, NB, Canada.

He went to Louis Robichaud High School in his birth city. He played several sports as a youngster and was one of the top badminton players in New Brunswick. But baseball was his number one sport. He was a member of the Canadian Junior National Team in 1985. In the Summer of 1986 at age 19, he threw a no-hitter in the Nova Scotia Senior League, where he played alongside former Major Leaguer Bill Lee. In 1987, he attended the Community College of Rhode Island for the first of two seasons and was named an All-American. That was a busy year on the national stage. He was a member of Team Canada in the 1987 Pan-American Games. He also starred for them in the 1987 Intercontinental Cup, going 3-0 with a 0.57 ERA; he was the only non-Cuban in the top 6 in ERA, trailing Pablo Abreu and Rogelio García. He tied García, Jorge Luis Valdés and Rene Arocha for most wins in the tournament; the rest of Canada's staff was 1-9. In 1988, he was slated to go to the University of New Haven but left after only a few days. He then came back to CCRH where he earned a second All-American award, leading the school to the JUCO World Series, where he was on the tournament All-Star team. In June, he was drafted by the St. Louis Cardinals in the 6th round of the 1988 amateur draft. He didn't sign immediately as he was expected to play in the 1988 Olympics in Seoul, South Korea. Cormier was 1-1 with a 5.71 ERA for the Canadian national team in the 1988 Baseball World Cup. His 22 strikeouts (in 17 1/3 innings) tied Yi-Hsin Chen, Charles Nagy and Andy Benes for 4th in the tourney, but he also walked 10 and allowed 19 hits. After the Olympics, he officially signed with the Cards and was assigned to the Florida Instructional League.

Cormier played his first pro season in 1989 with the St. Petersburg Cardinals, in the strong Florida State League. He made some adjustements during the season as he was tipping his pitches at some point, but overall, he was the team's best starting pitcher. He led the club in wins (12-7), ERA (2.23), strikeouts (122) and WHIP among starters (1.026). He was named on the post-season All-Star team and then sent to the Instructional League after the season.

At that point, he was considered a top prospect. In 1991, his record was 7-9 with Louisville, leading the team in wins. He had three complete game shutouts in 21 starts and he showed excellent control, walking only 31 in 127 2/3 innings. He joined the Cards in mid-August and won his first start on August 15th against the New York Mets. He remained in the rotation the rest of the season and threw at least five innings in each of them. He went 4-5 with a 4.12 ERA.

In the off-season, there were strong rumours that Cormier would be traded to the Montreal Expos, who were highly interested in the lefty due to his French-Canadian heritage. But the Cards never budged and when they obtained Andres Galarraga from the Expos, Ken Hill was the pitcher who left for Montreal. Entering Spring Training in 1992, he was a strong candidate for the Cards' rotation but he missed considerable time in March due to a bad case of the flu. That led to an 0-5 start with a 6.56 ERA. In early June, he was demoted to Louisville where he made one start before he was back with the big league club. From then on, he had the best stretch of his career, going 10-5 with a 2.67 ERA. The team won each of his last nine starts. His WHIP (1.220) was second to Bob Tewksbury on the team among starting pitchers.

The 1993 season a roller-coaster for Cormier. He was twice demoted to the bullpen during the season and missed more than three weeks when he was placed on the disabled list in the second week of August due to shoulder inflamation. He made 21 starts in 38 appearances, going 7-6 with a 4.33 ERA. His left shoulder acted up again in 1994 and he missed the whole months of June and July. He first missed time after his first stint on the DL in late April but made only one start before again being on the shelf in May. He made only 7 starts, going 2-2 with a 5.45 ERA.

When the players' strike ended in April 1995, the Cards re-acquired Ken Hill from the Expos. They had also acquired lefty veteran as a free agent Danny Jackson in December, and also had two more southpaws as starters, Donovan Osborne and Allen Watson. Cormier thus became available and less than one week into the shortened training camp, he was traded to the Boston Red Sox with Mark Whiten for Scott Cooper. He began the year in the starting rotation but was a reliever for much of the season. He had another chance at starting in August but finished the year in the bullpen. He made 12 starts in 48 games, posting a 7-5 record with a 4.07 ERA. He made two appearances in the ALDS loss against the Cleveland Indians.

After the 1995 season, the Expos and the Red Sox, whose GM was former Expos boss Dan Duquette, began talking about a trade involving Wil Cordero. In January of 1996, the trade was completed with Cormier, Shayne Bennett and Ryan McGuire going to Montreal for Cordero and Bryan Eversgerd. Cormier wanted to be a starting pitcher and that's what the Expos expected of him. He had an up-and-down season as a starter. In early August, he began experiencing elbow problems and he landed on the DL at the end of the month. He came back in September and finished the season in the bullpen. His record was 7-10 with a 4.17 ERA. He was fourth on the team in WAR. He was also the Expos' nominee for the Roberto Clemente Award. The Expos barely missed the postseason that year.

He suffered a serious setback in 1997. His elbow caused problems at the end of Spring Training. He was good enough to start the season but didn't finish the second inning in his lone start - and appearance - of the season, in the Expos' home opener on April 5th, giving up 5 runs to the Colorado Rockies. He eventually had Tommy John surgery in May. After the season, the Expos decided to not offer him a contract and Cormier became a free agent. In December, he signed a minor league contract with the Cleveland Indians.

In 1998, Cormier made only three rehab starts in June for the Canton-Akron Indians, in the Eastern League, but was shot down the rest of the season when his elbow acted up again, although the condition didn't require another surgery. The Indians didn't retain him after the season.

In January 1999, Cormier signed with the Boston Red Sox organization. An invitee in Spring Training at the big league camp, he broke camp with the Red Sox. He was the team's most reliable reliever with a WPA at 1.7, fourth with Boston but first among relievers. He was especially stingy against lefthanded batters, limiting them to a .546 OPS. He won his two decisions in 60 appearances with a 3.69 ERA. In the playoffs, he pitched six times, allowing no run in 7 2/3 innings. The Red Sox exercised their option on Cormier in 2000. His season was way different with a 4.61 ERA and a 3-3 record in 64 games. But he performed in clutch situations, posting a positive WPA of 0.791. He became a free agent after the season. Despite his ERA, the Philadelphia Phillies must have noticed Cormier's efficiency. In November, he agreed to the three-year, $8.75 million offer from the Phillies, with an option for a fourth season.

He was a short reliever in his first season back in the National League in 2001, with 51 1/3 innings in 60 outings. He was not yet a lefty specialist as he faced twice as many righthanded hitters as lefties. Ironically, he struggled against lefties that season, allowing a .838 OPS. He went 5-6 but blew five saves - a result of never getting a chance to actually close a game and to record a save, a common issue for middle relievers. Cormier had unusual control problems in 2002, allowing 26 unintentional walks in 60 innings, by far the worst ratio of his career. He went 5-6 again in 54 games with a 5.25 ERA. He didn't pitch in the last three weeks of the season due to shoulder tendinitis.

After two so-so seasons with the Phillies, Cormier needed to show something in the final year of his contract in 2003. His year began on a sour note as he allowed five runs in his first appearance against the Florida Marlins. He then shut down the opposition in his next 16 outings. That led to the best season of his career. He was 8-0 with a 1.70 ERA and a WHIP at 0.933 in 65 appearances. He was second in the league in WPA at 4.1, behind another French Canadian, Dodgers reliever Éric Gagné. The Phillies decided to keep Cormier for the next season.

He was given lots of responsibilities with the Phillies in 2004. He had 28 holds in 84 appearances, posting a 4-5 record with a 3.56 ERA. His WHIP was a very respectable 1.185 and again, his WPA was positive at 1.4. In December, he re-signed with the Phillies. However, the 2005 season was the worst of his career. He was used much more as a specialist, as he logged only 47 1/3 innings in 57 appearances. He missed two weeks in August and September due to a shoulder inflamation. His ERA was 5.89 and his record was 2-4.

He represented Canada gain in March 2006 in the first edition of the World Baseball Classic. He then started with a bang and didn't allowed a single run in his first 15 appearances. He kept pitching well with an ERA below .,00 in the first four months. Many teams expressed interest and in late July, he was traded to the Cincinnati Reds in return for Justin Germano. He didn't fare as well with the Reds but his final numbers were still very good with a 2.44 ERA in 64 games.

The Reds were trying to unload Cormier during Spring Training in 2007 but found no taker. During the season, he allowed only one hit and a hit batsman in his first five outings, covering 1 2/3 innings. On April 18th however,, the Houston Astros tagged him for three runs in 1 1/3 innings. That was the last game of his big league career. He was designated for assignment a couple of days later and released in early May. He was picked up later that month by the Atlanta Braves and was assigned to the Richmond Braves, in the International League. He allowed only one run in 7 2/3 innings before announcing his retirement on May 31st.

He wasn't quite through yet, though. He competed one last time with Canada for the 2008 Olympics in Beijing, allowing no runs but 4 baserunners in 2 1/3 innings. He allowed an inherited runner to score the winning run in a 5-4 loss to Team USA, allowing a double by Terry Tiffee to score Brian Barden. At 41, Cormier was the elder statesman of the event.

In total, he pitched 643 games in the majors, which places him second all-time among Canadian pitchers, behind only Paul Quantrill.

He was nicknamed "Frenchie" for being from French Canada, although in Quebec, his nickname is "l'Acadien" (The Acadian), a more precise reference to his origins.

He was elected to the Canadian Baseball Hall of Fame in 2012, and to the New Brunswick sports Hall of Fame two years later. He died from lung cancer at age 53 in 2021, only a few months after former teammate and fellow French Canadian Derek Aucoin.