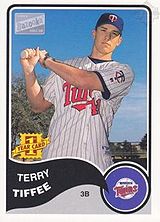 Terry Tiffee was drafted by the Minnesota Twins in the 26th round of the 1999 amateur draft. He was signed by scout Gregg Miller and made his pro debut the next summer. Tiffee had tipped the scales at 260 ls in high school, and was down to about 230 lbs. when the Twins drafted him out of junior college. By 2004 he was playing at around 215 lbs.

Most of Tiffee's major league appearances in the field were at third base.

Tiffee was the main first baseman for Team USA when they won Bronze at the 2008 Olympics in Beijing. He hit .324/.341/.486 with 6 doubles in 9 games; this tied Brent Abernathy's record for doubles in an Olympics event. His double against Rhéal Cormier scored Brian Barden with the 5th and final run in a 5-4 victory over Team Canada. Tiffee had an odd run-scoring sequence against the Dutch national team; he singled and took three bases in a row on wild pitches from Pim Walsma. In the preliminary round, he was 7th in average (.393) and 9th in slugging (.607) before slipping in the Medal round.