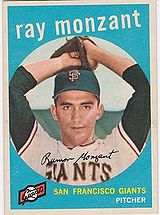 Ramon Monzant was the second Venezuelan pitcher to make it to the major leagues after Alex Carrasquel. The right-hander first came up with the New York Giants in 1954 after going 23-6 with a 2.73 ERA for the Danville Leafs and being awarded the Carolina League MVP award. The 22-year-old appeared in six games with the Giants with no decisions and spend the rest of the season with the Minneapolis Millers of the American Association, winning 11 and losing 7 in 161 innings with a 4.42 ERA.

On September 29, 1957, he was the starting pitcher in the Giants' final game at the Polo Grounds. Ramon was also the starter for the San Francisco Giants against the Los Angeles Dodgers in the first big league night game ever played on the West Coast on April 16, 1958. His best big league outing came a week later when he shut out the Chicago Cubs on four hits, striking out Ernie Banks three times. He finished up the 1958 year with an 8-11 record and a 4.72 ERA in 150 innings but unknown at the time an ailing arm would keep him out of the entire 1959 season. A comeback attempt the following year with the Tacoma Giants of the Pacific Coast League ended when he suffered a broken leg sliding into second base. Monzant had spent his entire major league career with the Giants (1954-1960) and was 16-21 in 106 games with a career 4.38 ERA.

Ramon's minor league record was considerably better, spending six up and down seasons during (1952-1960) between the major league and the minors, he compiled a 61-25 record with a 3.18 ERA. After baseball he worked as a supervisor for a brewery, retiring in Maracaibo, Venezuela, where he died on August 10, 2001 at the age of 68.

Ray had a striking physical resemblance with teammate Mike McCormick with the Giants. In fact, McCormick's 1958 Topps baseball card actually features a picture of Monzant, recognizable only because Monzant was right-handed while Mike was a lefty.