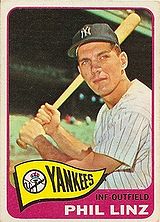 Phil Linz was a utility infielder with the New York Yankees in the 1960s, who is mostly known for being the harmonica player in the infamous "Harmonica Incident" on August 20, 1964. Following a four-game sweep at the hands of the Chicago White Sox capped by a 5-0 shutout, Linz pulled out his harmonica as the team bus was delayed leaving for O'Hare Airport. That infuriated manager Yogi Berra, who at first told him to stop. Linz, however, couldn't hear him and asked Mickey Mantle what he said. Mantle, ever playful, said "He said play it louder." So Linz did. Then Frank Crosetti apparently said, "That's the worst thing I've ever heard!" By then Berra completely lost his cool, charging Linz to have him stop the noise (Linz could barely play the instrument). The incident degenerated into a loud shouting match, and then Berra swiped at the instrument. It landed on Joe Pepitone, who apparently then shouted, "Corpsman! Oh, my knee, get me a corpsman!" and with a a number of reporters on the bus, it was all over the next day's newspapers. Fans then began to throw harmonicas on the field at every game and Linz received a $10,000 endorsement from Hohner Harmonica Co, then was featured on the back page of the Yankees' 1965 yearbook with the line "Play it again, Phil". Even though the Yankees recovered to reach the 1964 World Series, the front office felt that Berra was unable to control the team and after the Fall Classic replaced him with Johnny Keane, who had led the St. Louis Cardinals to a seven-game win over the Yankees in that World Series.

Linz's batting averages plummeted at the same time as the league averages went down in the second dead-ball era. In his last season, 1968 he hit .209 while the New York Mets as a team hit only .228.

Not a big home run hitter normally, he hit two homers in the 1964 World Series. The second one was off Bob Gibson in the 9th inning of the seventh game. Linz batted lead-off in all seven games of the Series.

After his retirement, Linz became worked in the insurance industry, rising to account manager with the Stewart Title Insurance Company in New York City. He lives in Stamford, CT.

"Baseball is a fun game. It beats working for a living." - Phil Linz