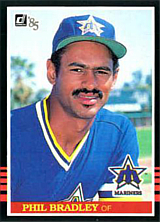 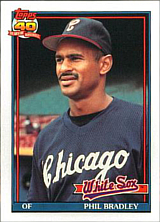 Phil Bradley was signed as a third round pick in the 1981 amateur draft by the Seattle Mariners and scout Steve Vrablik.

Bradley had three good years with the Seattle Mariners from 1985 to 1987, and was an All-Star in 1985. He was considered a bust after he was acquired in a trade by the Philadelphia Phillies, with Tim Fortugno, for Mike Jackson, Glenn Wilson and Dave Brundage. He had averaged 17 home runs and hit .302 with the Mariners between 1985 and 1987, but hit only .264 with 11 home runs with the Phillies in 1988. It should be noted that offense in baseball fell drastically in 1988 and he moved to a less hitter-friendly park. His OPS+ did fall from his 1985-1987 level, but was still 109 in 1988. Following the 1988 campaign, Bradley was traded to the Baltimore Orioles for pitchers Gordon Dillard and Ken Howell. He played better in 1989, raising his average to .277 with the familiar 11 home runs. His 123 OPS+ was similar to his years in Seattle. Midway through the 1990 season, Bradley was traded by Baltimore to the Chicago White Sox for designated hitter/first baseman Ron Kittle. He filed for free agency following that season and went to Japan for a season. Although he tried to hook on with a couple of big league clubs in the spring of 1992, Bradley never played in the majors again, finishing his career in AAA.

Bradley was the head coach at Westminster College (MO) in 1994-1996. In 2004, Bradley was a special assistant for the MLBPA. He has also served as assistant coach for the University of Missouri softball team. He currently is a Special Assistant to the Executive Director of the MLBPA.

In addition to baseball, Bradley was a three-time Big Eight Offensive Player of the Year and set a conference record with 6,459 total yards (since broken) as the starting QB of the Missouri Tigers from 1978 to 1980. His son, Curt, was drafted by the Los Angeles Dodgers out of Northern Iowa in the 33rd round of the 1006 draft and played for the GCL Dodgers in 2007.