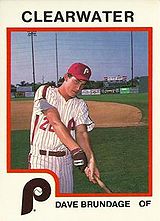 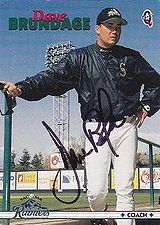 After his playing career, he became a minor league manager and coach in the Seattle Mariners organization. In 1998-2000, Brundage was a hitting coach for Tacoma . From 2001 to 2005, he managed the San Antonio Missions. The club won league titles in 2002 and 2003, and in the latter year, he was named Minor League Manager of the Year by Baseball America. Brundage rejoined Tacoma as manager for the 2006 season. He joined the Atlanta Braves organization after that year as skipper of the Richmond Braves and won the Governors' Cup his first year at the helm. He stayed on as the Braves moved to Gwinnett County, Georgia in 2009, becoming the Gwinnett Braves, and managed the team for its first four seasons. In 2013, he was appointed manager of the Lehigh Valley IronPigs, the Philadelphia Phillies' top farm team. Brundage was scheduled to manage the Sacramento River Cats in 2020 before the season was cancelled due to COVID-19.

Brundage is one of the most decorated amateur athletes in Oregon state history. He graduated from McKay High School in Salem, where he earned All-State honors in football, basketball and baseball. Brundage also spent 11 years as a Golden Gloves boxer, during which time he defeated three future Olympic Gold Medalists. While at Oregon State University, Brundage earned All-American honors as an outfielder in 1986 while serving as punter and backup quarterback for the Beavers football team.