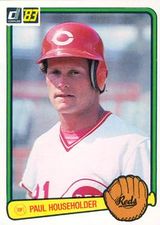 Paul Householder is actually one of four major league players with that last name. He played eight years in the major leagues, most notably for the Cincinnati Reds in the early 1980s. He also played nine years in the minors, hitting 96 home runs.

Born in 1958 in Columbus, OH, he was a second-round draft pick by the Reds in the 1976 amateur draft. An outfielder, he came up originally at age 21 in 1980 when the Reds' outfield consisted of George Foster, Dave Collins, and Ken Griffey Sr.. In spite of the competition, he was a regular by 1982 (at which point the other outfielders were Cesar Cedeno and Eddie Milner).

He was traded by the Reds in 1984, shortly after Pete Rose became the manager, and after the season the St. Louis Cardinals traded him to the Milwaukee Brewers, where he became a regular outfielder alongside Robin Yount and Rick Manning in 1985. After that, he played only briefly with Milwaukee in 1986 and the Houston Astros in 1987 and was finished.