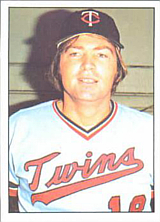 As of 2019, Mike Pazik is the last player from Holy Cross to play major league baseball. 77 players from that college have played MLB, but none in the last 40 years. Mike played for the Minnesota Twins from 1975 to 1977.

He was a year older than Bert Blyleven and four years younger than Rod Carew.

Pazik's big-league career ended when he was badly injured in a car wreck in April 1977. He was the passenger in a Volkswagen van driven by teammate Don Carrithers. They were coming off Interstate 494 in Bloomington, MN when a young Ohio woman mistakenly got on the freeway via the exit ramp. In the collision, Pazik suffered two broken bones in each leg.