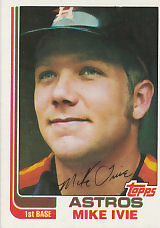 Originally a catcher, Ivie was chosen by the San Diego Padres as the first overall selection in the 1970 amateur draft. Three catchers were selected in the first four picks (including future All-Star Darrell Porter at #4). He hit 65 home runs over 5 seasons of minor league ball, with cups of coffee in the majors in 1971 and 1974. He reached the majors for good in 1975, splitting time between first base and third and earning a spot on the Topps All-Star Rookie Team. The next summer, 1976, as the team's regular first baseman, he led the Padres with a .291 average and 70 RBI.

Dealt to the San Francisco Giants for Derrel Thomas prior to the 1978 season, Ivie saw most of his action that year as a backup to Willie McCovey at first and as a pinch hitter. He hit .387 with 4 home runs and 20 RBI pinch hitting that year. The following summer, he hit 27 homers and drove in 89. However, he cut his hand in an accident following the season, and his home run output dropped to just 4 in 1980. He was dealt to the Houston Astros in 1981 and then signed with the Detroit Tigers in 1982. He retired at age 30 after playing just a dozen games for Detroit in 1983.

Ivie never had as many as 500 at-bats in any one season. Bill James once called him a potential MVP if given 550 at-bats to cut loose. He played mostly first base, but also appeared in 92 games at third, 46 in the outfield, nine at catcher, 79 at DH, and even one game at second base.