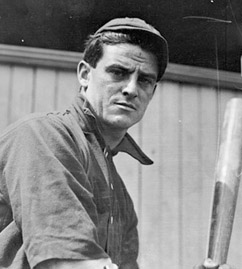 Turkey Mike Donlin was an excellent player, with a major league OPS+ of 144. He later became an actor.

Donlin played professional baseball in Santa Cruz, CA and San Jose, CA, before coming to the St. Louis Perfectos in 1899, where he had excellent batting and slugging averages. The following year with the Cardinals, he appeared in 78 games and hit 10 home runs, good for third in the National League.

He moved over to the American League in 1901, in its first year as a major league, and finished second in the batting championship. He was managed by John McGraw, who was to be his manager later in his career also.

In January of 1907, Nixey Callahan signed Donlin and he spent the season with the semipro Logan Squares, an outlaw team according to Organized Baseball. Any member of the outlaw team wanting to continue playing professionally had to pay a fine; Donlin paid about $200 to return to the Giants in February of 1908.

He later scouted for the Boston Braves and the New York Giants. He also played some semi-pro ball and managed Memphis in 1917. He had umpired one National League game in 1900 when he was an active player, then in 1918 he came out of retirement to work one American League game.

In Hollywood, he became an actor while still a ballplayer. He appeared on stage, and then was in numerous movies. The Internet Movie Database lists over 60 credits for him from 1915 to 1935.

One of his two wives was a vaudeville star.

When he had heart troubles in 1927, his acting friends raised money to send him to the Mayo Clinic for an operation.

Donlin had an OPS+ of the sort that often gets a player into the Hall of Fame. He ranks # 52 on the all-time list, tied with Sam Crawford and Hack Wilson. However, his career lasted only 12 years, and he had less than 4,000 at-bats. He was frequently in the top five in batting categories, but was almost never the leader.