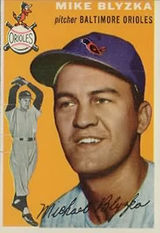 Along with having the distinction of being born on Christmas Day, Mike was with both the Browns in their final season in St. Louis (in 1953) and the Baltimore Orioles in their first post-1902 major league season in 1954. He did not have much success in either city, going 2-6 for St. Louis and 1-5 for Baltimore to finish his major league run 3-11. The right-hander was part of the 18-player trade between the Orioles and the New York Yankees after the 1954 season that saw "Bullet" Bob Turley and Don Larsen go to the Bronx Bombers. Mike made the same trip, but the Yankees dropped him off with the Denver Bears in the American Associationin 1955. Thus, Blyzka never quite made it to Yankee Stadium, pitching for the AAA Bears again in 1956 and finishing out his pro career with the AAA Minneapolis Millers and the Springfield Giants in 1957. Mike spent from 1946 through 1957 in professional baseball and, aside from his major league numbers, put together some decent minor league stats. He appeared in 237 contests, going 63-60, pitching 1,064 innings, giving up 1,122 hits and 568 walks for a 4.34 ERA.

Although Mike never made it into Yankee pinstripes, as he was sent out to Denver, he enjoyed the Rocky Mountain area enough to settle there after baseball. The Korean War veteran managed and tended bar at a VFW post until his death at the age of 76 on October 13, 2004 in Cheyenne, WY.