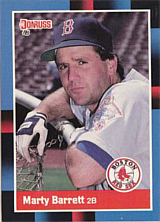 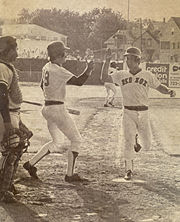 Second baseman Marty Barrett played a decade in the majors, almost exclusively with the Boston Red Sox. He is the brother of second baseman Tom Barrett and minor league pitcher Charlie Barrett.

Barrett was signed as a secondary phase pick in the 1979 amateur draft by the Red Sox and scout/former All-Star Ray Boone. While playing for the Pawtucket Red Sox in 1981, he scored the winning run in the longest game in baseball history. After getting 2 hits in his first 12 at-bats of the game, he was hit by a Steve Grilli pitch in the 33rd inning. He moved to third on a Chico Walker single and scored a batter later on a single by Dave Koza.

Barrett reached the majors as a September call up for Boston in 1982 and became the team's regular second baseman in 1984. He had his best big league season in 1986, hitting .286 with 4 home runs and 60 RBI and starring in the postseason. In the ALCS, he got 11 hits in 30 at-bats (.367) and was named the series MVP as the Red Sox beat the California Angels in seven games. He did even better at the plate in the World Series, hitting .433 with 13 hits. His 24 hits in the postseason were a record at the time, later broken by Marquis Grissom in 1995. Barrett was the original player of the game in Game 6 of the World Series as chosen by NBC; a distinction that would be lost as the Mets made their memorable comeback. Even with all the success in that Fall Classic, Barrett was struck out by New York Mets pitcher Jesse Orosco as the final out of the Series, won in seven games by New York.

In 1988 Barrett pulled off a unique steal in a game against the Baltimore Orioles. When the throw from Terry Kennedy beat him to the bag, he stopped short as Billy Ripken went to tag low, expecting a slide. Barrett then reached his leg over to the base, getting a steal that relied more on smarts than speed. Barrett suffered a knee injury after tripping over first base after grounding out in a 1989 game that greatly reduced his playing time. After being released by the Red Sox in 1990, he briefly played for the San Diego Padres in 1991 before another knee injury ended his playing career.

Following his playing days, Barrett was a coach for the Las Vegas Stars from 1992 to 1994. In 1995, he managed the Rancho Cucamonga Quakes, where his players included Derrek Lee and Matt Clement. He left baseball after that year to spend more time with his family. More recently, he has been involved in real estate in Las Vegas and, in his free time, frequently golfs with Greg Maddux.