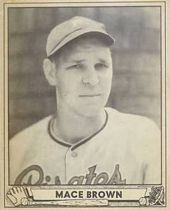 "I got him strike one, then a foul ball for strike two, both curves... When he was swinging at one of them, he just looked like a schoolboy, and I said to myself, 'I'll just throw him a better one and strike him out.' Well, I just made a lousy pitch. He hit it to left center up into the seats. I didn't follow it into the darkness. I knew it was gone." - Mace Brown, discussing the famous Homer in the Gloamin', in the book Pen Men

One of baseball's first relief specialists, pitcher Mace Brown recorded 48 saves during a decade in the majors.

Brown attended the University of Iowa, where he was a javelin thrower on a track scholarship. He began his pro baseball career in 1930 and reached the majors with the Pittsburgh Pirates in 1935, going 4-1 with a 3.59 ERA in 18 games. He won 10 games in 1936 and recorded 15 victories in a National League-leading 51 appearances in 1938, a year in which he also pitched in the All-Star Game. However, on September 28, 1938, he allowed the walk-off "Homer in the Gloamin'" to Gabby Hartnett that ultimately clinched the pennant for the Chicago Cubs over Mace's Bucs. Brown's contract was sold to the Brooklyn Dodgers early in the 1941 campaign, and he was acquired by the Boston Red Sox later that year, making an American League-leading 49 appearances with 9 saves and a 2.12 ERA in 1943. He took a two-year hiatus in 1944 and 1945 to serve in the Navy in World War II and returned in 1946, going 3-1 with a 2.05 ERA in 18 games. That fall, he saw his only postseason action, pitching one inning in the World Series against the St. Louis Cardinals.

After retiring as a player, Brown was a scout and instructor for the Red Sox from 1947 to 1964. He was the pitching coach for the club in 1965 and then returned to his scout role for the club until 1979. During that span, he was responsible for discovering Jim Rice and helping Carlton Fisk develop. From 1979 to 1989, he served as a consultant to the Red Sox.