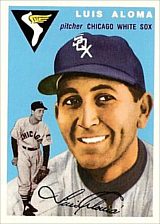 Pitcher Luis Alomá went 18-3 in four big league seasons, all with the Chicago White Sox, and holds the highest career winning percentage (.857) among pitchers with at least 20 decisions.

Cuban native Alomá was originally discovered by Washington Senators scout Joe Cambria in 1944 and played several seasons in their farm system. After spending 1949 with the Buffalo Bisons in the Detroit Tigers organization, the White Sox acquired him, largely because he could serve as an interpreter for Spanish-speaking players Chico Carrasquel and Mike Fornieles. Ironically, the Sox traded Carrasquel's uncle Alex to the Tigers to obtain Alomá. Luis had his best season in 1951, when he went 6-0 with a 1.82 ERA in 25 games. That year, he pitched a shutout in his only career start, a 9-0 victory over Alex Kellner and the Philadelphia Athletics in the second game of a doubleheader sweep on June 17th. He was forced to retire after the 1953 season due to chronic bursitis.

After his playing days, Alomá ran a restaurant for a time. In the 1960s, he founded an organization for Cuban refugees in Chicago, IL.