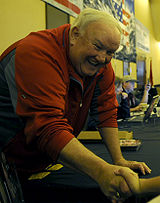 Barnett was working home plate in Game 3 of the 1975 World Series between the Cincinnati Reds and the Boston Red Sox when in the top half of the 10th inning, Cesar Geronimo was on first and Reds' manager Sparky Anderson sent Ed Armbrister up to bat. Armbrister laid down a sacrifice bunt and ran into Red Sox catcher Carlton Fisk causing Fisk to throw high to second. Barnett ruled no interference on the play, which would be a controversial call.

His career ended when he handed in his resignation as part of a mass resignation ploy orchestrated by Major League Umpires Association head Richie Phillips in late July of 1999. Major League Baseball foiled the plan by accepting the resignations, promoting umpires from the minor leagues to take the place of the resigning officials, and reintegrating a few of those who changed their minds when they realized the negotiating ploy was a complete failure. Barnett was the AL's most senior umpire at the time, and finally decided to retire for good, accepting a job as a supervisor of umpiring with MLB in 2000, after the job action was resolved.