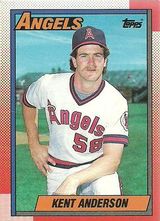 The California Angels drafted Kent Anderson in the 4th round of the 1984 amateur draft. After signing with scout Alex Cosmidis, the 20-year-old infielder spent the season with the Class A California League Peoria Chiefs. He appeared in 67 games with 223 at-bats and hit .224.

Kent spent 5 seasons in the minors before getting a chance in the majors. It was in 1989 that he debuted with the Angels, and the 25-year-old played 86 games, fielded .972 mostly at shortstop and batting .229 (51-for-223). Anderson was up again in 1990, appearing in 49 games and batting .308 while fielding .964 back at mostly shortstop. He spent 1991 with the Pacific Coast League Edmonton Trappers and 1992 with the PCL Calgary Cannons and wound up his pro baseball career in 1993 in the AAA American Association, splitting time between the Indianapolis Indians and the Iowa Cubs. He joined the Chicago White Sox during the replacement player spring training of 1995.

Anderson is the brother of former major league outfielder and first round draft pick Mike Anderson.