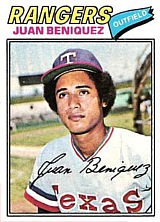 Juan Beníquez came up to the majors with the Boston Red Sox as a shortstop but was converted to the outfield, where he spent most of his big league career. As a player, he hit for decent averages (.274 for his career, with four consecutive seasons of .300 or better) but had limited power and did not draw many walks. A fast baserunner when he came up, his stolen bases diminished rapidly, but he was always useful for his ability to play multiple positions and his capacity to get a timely hit. His personal high was for doubles in a season was 19, a very low total for a player who would regularly top 300 at-bats.

Juan was signed by scout Pedro Vasquez. He was originally slated to be a starting outfielder and the lead-off hitter for the Red Sox in 1975, after sharing the center field job with Rick Miller in 1974, but the emergence of rookie superstars Fred Lynn and Jim Rice quickly changed those plans and he spent the year as a backup. He started all three games of the Sox's sweep of the Oakland Athletics in the 1975 ALCS, then played in the 1975 World Series, going 1 for 8 in 3 games as they lost to the Cincinnati Reds. After the Series, he was involved in the first of three huge trades he would be part of, going to the Texas Rangers with two others in return for Fergie Jenkins. He had an outstanding defensive season as the Rangers' starting center fielder in 1976, and was rewarded with a Gold Glove at the position the following year, 1977, when his statistics were not as good.

After the 1978 season, he was in his second big trade, this time going to the New York Yankees in a ten-player deal whose biggest names were Sparky Lyle, Mike Heath and Dave Righetti. After one season as a backup in 1979, he was sent to the Seattle Mariners in another big deal which also included Jim Beattie and Ruppert Jones. He played one season in Seattle, as a backup in 1980, before signing as a free agent with the California Angels. That is where he had his best years as a semi-regular outfielder. He hit .305 in 1983, then .336 in 1984 and .304 in 1985. After leaving for the Baltimore Orioles in 1986, he had another good season, hitting .300 in 113 games. That year, he hit half of his season's total for home runs (6) in a single game on June 12th, a loss to the Yankees. He finished his career with the Kansas City Royals in 1987, was traded to the Toronto Blue Jays for the pennant push late that season in return for pitcher Luis Aquino, and hit .284 in 39 games as the Jays fell to the Detroit Tigers just short of an AL East title. He was granted free agency after the season as a victim of collusion following the 1985 season, but re-signed with the Jays for 1988. He was still hitting well (.293 in 27 games) when the Blue Jays released him on May 31st. He failed to find another team and retired at age 38, having played exactly 1,500 major league games for 8 different American League teams, a record.

In 1989, he hit .359 playing for the St. Lucie Legends in the Senior Professional Baseball Association. Beníquez also pitched 3 scoreless innings in one game for St. Lucie; he gave up one walk and no hits. Juan also played 22 seasons in the Puerto Rico Winter Baseball League with the Arecibo Wolves and Santurce Crabbers. He continued to play at home after his MLB career ended, missing only the winter he spent with St. Lucie. Juan finally retired as a player after the 1990-91 season. He later coached for and managed the Indios de Mayagüez.