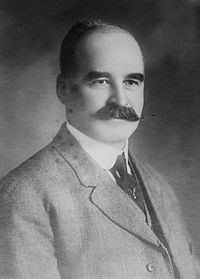 Joseph Lannin was the owner of the Boston Red Sox from 1913 to 1916, during one of the team's most successful periods on the field, winning back-to-back World Series titles in 1915 and 1916.

Lannin was the 9th of 10 children born to an impoverished Irish immigrant family in Quebec. When his mother died in 1880, the 14-year-old boy decided to set out on foot in search of better economic opportunity, leaving his small hometown of Lac-Beauport, QC and heading to Boston, MA, a 410-mile journey. He followed the route used by fur traders and did odd jobs for them to earn money along the way. When he arrived in Beantown, he found work at the swank Adams House Hotel as a bellboy, earning $3 per week plus tips. He lived frugally and managed to save a bit of funds, all the while listening to stock tips and real estate advice offered by the hotel's wealthy patrons. A smart and dedicated worker, he quickly rose through the ranks, eventually working in management, all the while investing his spare funds in real estate and commodities. He was particularly successful in cornering the coffee market, and built a real estate empire starting from that very modest basis.

A sports enthusiast who had played lacrosse in his youth, Lannin decided to purchase a 50% share in the Red Sox from Jimmy McAleer and Robert B. McRoy in 1913, then bought the club outright from John I. Taylor the following year. In July of 1914, he met with Jack Dunn, owner of the then-struggling minor league Baltimore Orioles, who were being battered by the competition from the Federal League's Baltimore Terrapins, and agreed to purchase a few players from Dunn, including young pitcher Babe Ruth, who had been recommended by former Red Sox shortstop Freddy Parent, now playing for the Orioles. Thus, Lannin gave Dunn somewhere between $20,000 and $30,00 to purchase the contracts of Ruth, fellow pitcher Ernie Shore and catcher Ben Egan. The money allowed Dunn to stay afloat, and he eventually outlasted his Federal League rivals, after moving his operations to Richmond, VA for a year. But Lannin was not finished dealing with the struggling IL: on July 31st, he bought the Providence Grays club and its ballpark from the Detroit Tigers for $75,000, securing a number of good young players in the process, including P Carl Mays.

With Ruth, Shore and Mays now prominent members of the pitching staff, the Sox won the World Series in 1915, defeating the Philadelphia Phillies in 5 games, and again in 1916, when they beat the Brooklyn Robins, also 4 games to 1. No other Red Sox team has ever won back-to-back championships. Lannin then sold the team to Broadway producer Harry Frazee, who would win another World Series in 1918, before he began to sell players to the New York Yankees to finance his debts. Frazee's purchase of the team was heavily leveraged, and he found it difficult to honor promissory notes written to Lannin as part of the purchase agreement. When Lannin threatened to sue to obtain the money due him in 1920, it forced Frazee to sell Ruth to the Yankees in order to obtain the necessary cash, and then a number of other players in order to stay financially afloat over the next few years. The Red Sox would not win another World Series title until 2004.

Joseph Lannin married Hannah Furlong and had two children, Paul and Dorothy. After his time as Red Sox owner, he continued to work in real estate. Among his properties was Roosevelt Airfield on Long Island, NY, from which Charles Lindberg launched his historic trans-Atlantic flight in 1927; Lannin hosted Lindberg at one of his nearby hotels before his flight, and was present for his take-off. Never forgetting his impoverished roots, he was very involved in philanthropy in his later years. He was working on fixing the awnings on one of his properties, the Granada Hotel in Brooklyn, NY, on May 15, 1928, when he apparently experienced a dizzy spell and fell nine floors to his death. At least, that was the official explanation; others have suspected foul play, without anything ever being proved.

Lannin was inducted into the Canadian Baseball Hall of Fame in 2004.