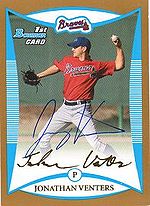 Jonny Venters was signed by the Atlanta Braves and scouts Alex Morales and George Martin as the 30th round pick in the 2003 amateur draft.

He had great success in his first two major league seasons with the Braves in 2010 and 2011, posting a sub-2.00 ERA both years and making the All-Star team the second year. He was used as the main set-up man for Craig Kimbrel during the period. His 164 games pitched over the two-year period were the most in the major leagues. He was not as sharp in the first half of the 2012 season and spent time on the disabled list, but then came back pitching as well as ever, as he put up an ERA of 1.71 over 26 appearances after returning from the DL, ending with a 3.22 ERA in 66 games.

However, injuries got the best of him after that point. He felt discomfort in his elbow during spring training in 2013 and underwent Tommy John surgery in May, without having pitched at all. He had undergone the procedure once before, 8 years earlier, after pitching the 2005 season with the Rome Braves of the Class A South Atlantic League, and had missed all of 2006 as a result. He was hoping to return to the Braves in spring training in 2014, but was n't cleared to begin throwing again until July. He never got into a game, because in practice sessions, he was unable to get his fastball above 80 mph. A follow-up exam with Dr. James Andrews in August revealed that he had torn the ligament again, and he was facing the prospect of undergoing the surgery for a third time, with the odds of pitching again in the major leagues now stacked against him.

He did decide to see if it was third time lucky for him and in 2016 made his return to the mound with the Class A Charlotte Stone Crabs of the Tampa Bay Rays organization. He pitched 5 games, giving up 4 runs in as many innings. He saw more action in 2017 as he was with four different teams in the Rays' system, including one outing in AAA with the Durham Bulls. The results were encouraging, as in 28 appearances, his ERA was 2.28, albeit in just 23 2/3 innings. He was still striking out a ton of batters, with a total of 29, against just 15 hits. The Rays then issued him an invitation to spring training in 2018 and he beat very long odds by making it back to the majors when he was called up on April 25th. He made his return to a big league mound that very same day, getting Chris Davis of the Baltimore Orioles to ground out on four pitches to start off the 6th inning; Davis was the only batter he faced in that game. He earned his first win since 2012 on May 15th when the Rays beat the Kansas City Royals, 6-5. He was 1-1, 3.86 in 22 games, including a start in one of the Rays' "bullpen days", when on July 26th he was traded back to his original organization, the Braves, in return for international bonus pool money. He was the third veteran pitcher traded away by the Rays in two days, following Nathan Eovaldi and Matt Andriese.