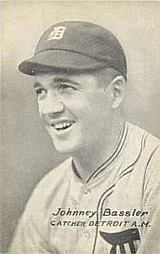 "I was a dead left-field hitter and all a good pitcher had to do was shoot me a fast high ball, inside, and I'd pop up. I found [Bobby] Veach used a little fuller swing than I against this delivery, always keeping his wrist behind the point of contact with the ball. About the middle of 1924, after experimenting, I landed upon the combination of a big-handled bat of light Cuban wood and a full swing patterned after Veach. Then suddenly they began to line into right and center for me." - Johnny Bassler, on his improved hitting to the Traverse City [MI] Record Eagle on June 4, 1926

Catcher Johnny Bassler was a high average hitter with the Detroit Tigers throughout the 1920s. Johnny also had a selective batting approach, allowing him to finish his big league career with a .304 batting average and .416 on-base percentage. One thing Johnny lacked was power - his lone big league home run in 2,863 plate appearances came on July 23, 1924, off the New York Yankees' Bob Shawkey. His main teammates included Harry Heilmann (2935) and Ty Cobb (2221).

Johnny was a minor league star before and after his stay in the majors, hitting for a .314 career average over 16 seasons spent mainly in the Pacific Coast League. Johnny played until age 42, wrapping up his career as player-manager for the Seattle Indians in 1937. After his playing career ended, Johnny remained in the game and was a coach for the Cleveland Indians (1938-1940) and St. Louis Browns (1941). In 1943, Bassler was elected to the Pacific Coast League Hall of Fame.