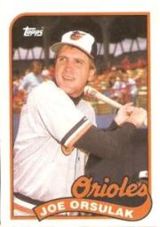 Joe Orsulak was an all-state goal keeper in soccer at Parsippany Hills High School, where he also played baseball and basketball. Joe was a 6th round pick in the June draft of 1980. He finished 6th in the Rookie of the Year Award voting in 1985. During the time in the season when the Pirates traded Bill Madlock to the Los Angeles Dodgers for Sid Bream and R.J. Reynolds, he operated as the Pirates' leadoff batter. The lineup was memorialized at the time by Lanny Frattare as "The Slack, R J, J Ray and JT", referring to Orsulak, R.J. Reynolds, Johnny Ray, and Jason Thompson.

A severely sprained ankle derailed Joe's career as a Pirate; he was traded to the Baltimore Orioles after the 1987 season, where he spent many productive years. Although he hadn't been a power hitter in Pittsburgh, he enjoyed the short right field fence in Memorial Stadium and had a year of double-digit homers in 1990. He finished his career with the Florida Marlins and the Montreal Expos, with whom he played his last game in 1997.