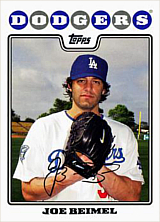 Joe Beimel and his wife Carley

Joe Beimel is perhaps best known for cutting his hand on glass the night before the Los Angeles Dodgers began the 2006 NLDS against the New York Mets. He was widely criticized for the lack of judgment as he was out drunk and past curfew; he had originally said the incident occurred in his hotel bathroom before admitting it was at a bar and that he had been out late drinking beer.

In 2008, Beimel won a Dodgers.com internet poll asking fans which player they would like to see on a bobblehead. In reaction, Beimel described himself as an "Internet god" and his bobblehead was given out to fans at Dodger Stadium on August 12. Beimel is also the first and only major leaguer to wear 97 as his uniform number.

After going 1-1 with a 5.33 ERA in 35 appearances for the Pittsburgh Pirates in 2011, Beimel was out of the major leagues in both 2012 and 2013. Tommy John surgery wiped out all of the first season, while he spent the second rehabilitating in the minor leagues, pitching 30 times for Triple A Gwinnett in the Atlanta Braves' organization. He was 1-2 with a 4.36 ERA in 33 innings and showed enough for the Seattle Mariners to issue him an invitation to spring training as a non-roster player in 2014. He made the team and had a very good season, pitching 56 times in relief with an ERA of 2.20 and a 3-1 record in 45 innings of work. However, he struggled badly after joining the Texas Rangers before the 2015 season and was released on March 23 after giving up 14 runs on 13 hits in 3 spring training innings. The Mariners picked him up again a week later, and he played another full season in Seattle, going 2-1 with 1 save and a 3.99 ERA in 53 games.

Joe's father, Ron, won the Democratic nomination for assessor of Fox Township in Elk County, Pennsylvania, in May 2007.