Note: This page is for 1950s pitcher Jim Davis; for others with similar names, click here. 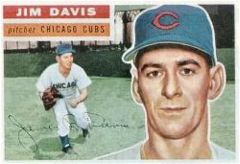 Lefthander Jim Davis was signed by the Boston Red Sox as an amateur free agent before the 1946 season and spent the year with the class B Lynn Red Sox. He posted a 9-7 record in 24 games with a 2.32 ERA his initial season in pro ball.

Davis would spend nine years in the minors before finally getting a look at major league hitters in 1954. During this trip he was with Lynn, the Class A Scranton Red Sox, the Class AA Birmingham Barons and the AAA Seattle Rainiers. On October 2, 1949 he was purchased by the Pacific Coast League Seattle team from Boston and in turn he was sold by the Seattle club to the Chicago Cubs on April 15, 1954, for his major league debut.

Davis was with the Cubs for three seasons, from 1954 to 1956, where he won 23 and lost 25 with a 3.87 ERA. On December 11, 1956 the Cubs traded him along with Sam Jones, Hobie Landrith and Eddie Miksis to the St. Louis Cardinals for Tom Poholsky, Jackie Collum, Ray Katt and Wally Lammers.

Davis had a fine minor league career. He made 361 appearances, winning 102 games and losing 73 while pitching 1,541 innings. He gave up 1,579 base hits and 539 base on balls for a 3.30 ERA. After baseball he owned a business repairing athletic equipment, primarily football helmets and shoulder pads.

Davis looked back fondly at his years in baseball in an interview shortly before his death on December 6, 1995 at age 71 in San Mateo, CA. "Marv Grissom is my uncle. He's my mother's brother. We roomed together in Seattle then later with the Giants. When I was with the Cubs we pitched against each other on the Game of the Week on television. What a thrill it was for my grandmother to watch her son pitch against her grandson."